“Technology is a tool for creativity,” says Simon Riley, founder and CEO of MakerClub, the company inspiring the next generation of engineers by the help of 3D printers and robotics. The 3D printing industry is one of the fastest growing fields. A number of reports show it is expected to scale from “$3.07B in revenue in 2013 to $12.8B by 2018 and exceed $21B in worldwide revenue by 2020.”

Coming from a family of teachers and having tech education himself, Simon saw the gap. Maker Club intertwines technology with creativity, their 3D printed robotics projects teach electronics, programming, and CAD design in an engaging way. As 3D printing becomes more accessible and IoT is scaling rapidly, it is no surprise MakerClub, founded only two years ago, is enjoying an impressive success.

You have been the UK winner of the Creative Business Club 2015 (CBC) and named one of the 50 most creative companies in the UK by Creative England. Tell us about the journey that brought you there. 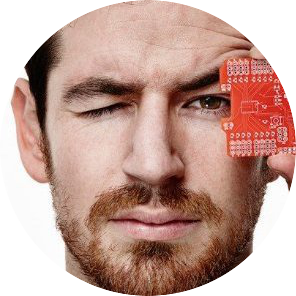 It’s been a long and rocky ride! I’d been a developer for just over 10 years when I first decided to start the company that would turn into MakerClub. I’d worked for a number of startups as well as some big companies like Experian, Brandwatch and Ebay. Both, my mum and sister were teachers, so the idea of helping to shape young people was always close by. I got a basic 3D printer called a Rep Rap about 3 years ago as a birthday present. It opened up my eyes to the amazing possibilities on offer when you combined 3D design, electronics and code. I realised that anyone could become a product designer!

After receiving some seed funding from my previous boss, I started Carduino, which focussed in on a 3D printable remote control car that was controlled by a mobile phone and could be programmed by a child. After a few months of meeting teachers, iterating the design and hiring my first employee (our CMO), we changed the name to MakerClub and came up with a much larger plan to tackle the lack of provision for emerging technology in schools.

18 months after that, we’d run 2 successful crowdfunding campaigns for our 3D printable robots, won a whole load of grants, gained further investment of nearly £200k, opened up Brighton’s first “makerspace” for kids, run over 250 workshops and built a world class learning platform that could be used by thousands of young people. The company now has 5 employees and we’re looking to enter our 2nd investment round in September. That first car feels like an age ago and we’ve only just started! 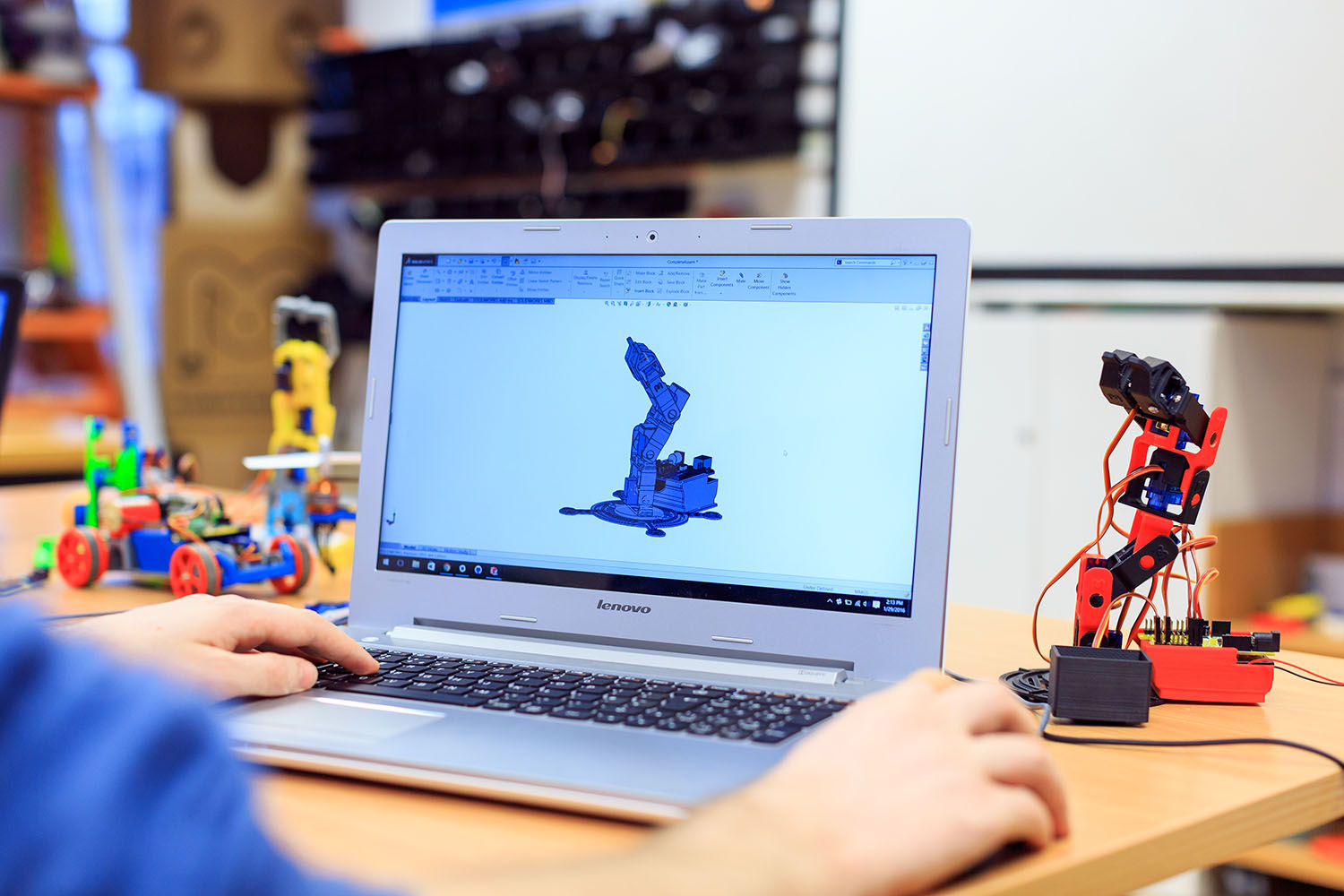 We want to be a global hub for young people to discover and embrace the maker movement.

You are on a mission of getting “young people into coding and 3D printing.” What is MakerClub’s ultimate goal?

We want to be a global hub for young people to discover and embrace the maker movement. Whether it’s learning about new technology, showing off their latest invention or collaborating with others on awesome new creative hardware projects, we want to be the first place they turn.

Essentially we’d like to see hundreds of thousands of kids showcasing their inventions on MakerClub and using our products and learning platform to expand their skills.

How do you combine teaching technology with creativity without damaging either?

They are intrinsically linked. Technology is a tool for creativity. Most young people learn best when a subject is hands-on, messy, and imaginative. Technology gives them the chance to unleash the limitless potential of their mind and develop creative solutions to wider problems…or perhaps, just make a robot that spins uncontrollably!

Either way, it’s fun and it works. As with anything, trusting the learner and giving them the space to fail and then try and problem solve is really important. MakerClub workshops and online learning tools have been designed to give as much freedom as possible, while at the same time making sure that there is a basic framework to give some structure.

Over the past few years, 3D printing has considerably risen in popularity infusing the establishment of a lot of startups working with or around it. Failure has also been frequent. What do you think made MakerClub successful?

Well, funnily enough, we realised quite quickly that while 3D printing was something that had caught the zeitgeist, it really wasn’t (and still isn’t) ready for the mass market. At this point, basing your whole business on the technology felt a little dangerous.

3D printers under the £2k level are still mainly used for prototyping in small design studios, “makerspaces” or in the engineering departments of universities. This will and is changing fast, but is definitely still a few years away. We think that a 3D printer will be the hot Christmas present in 2017/18. In the meantime, we’ve diversified. Focussing on getting our other revenue streams up and running to give us time to develop our product designs and technology, so that when 3D printing does finally hit, we’ll be ready and waiting.

Our focus at the moment is to build a large content database of maker projects, fill up our regional clubs and workshops and sell our 3D printable robotics kits to new users, as they slowly come online. It’s a revolutionary technology that will transform everything, but for the moment, we’re happy building our community into something that’s much bigger than just one technology. 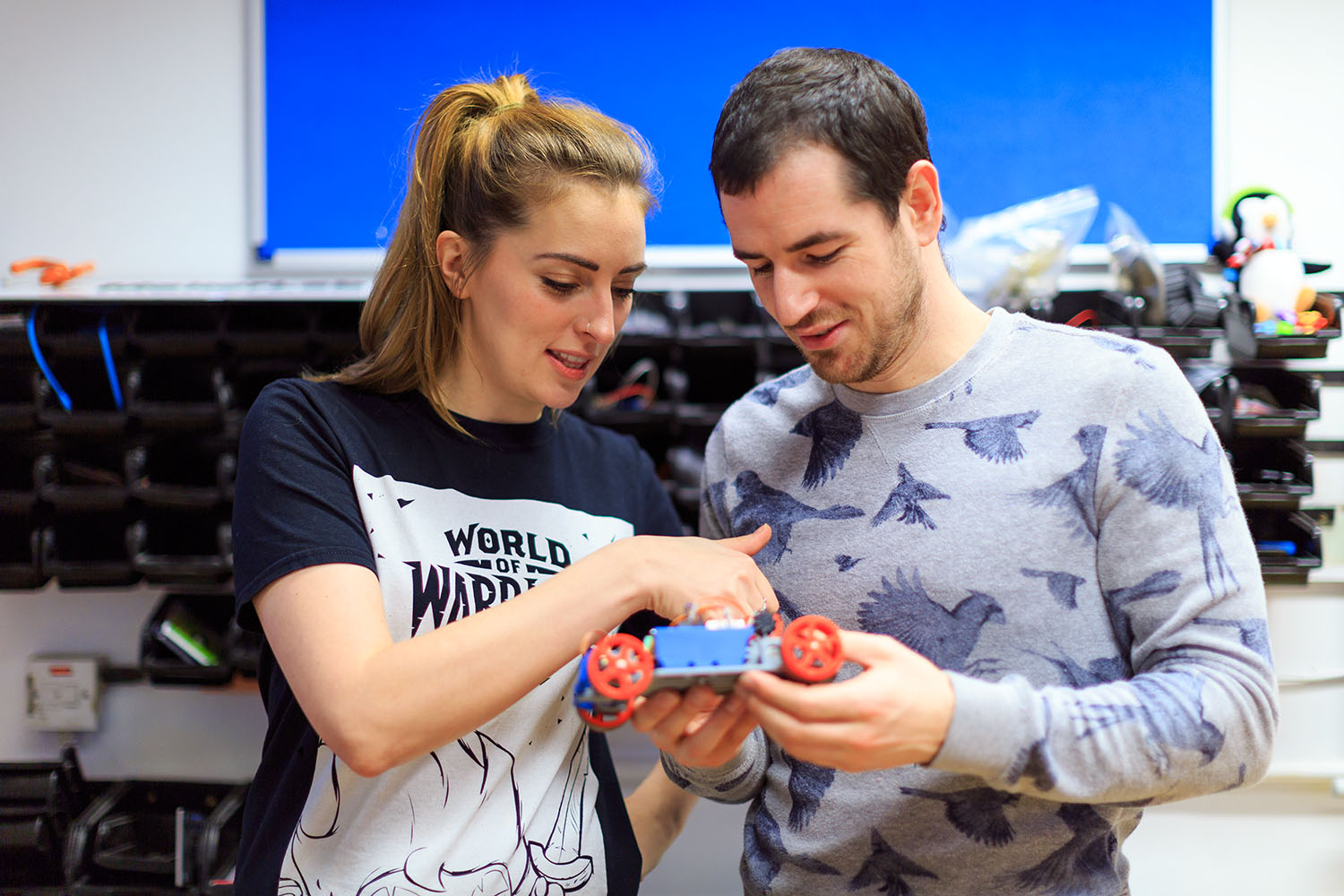 Technology is a tool for creativity. Most young people learn best when a subject is hands-on, messy, and imaginative.

On which stage of development, do you think, is Edtech right now? Do you fit or lead the landscape?

As of last year, only 3% of global education is delivered digitally. In today’s age of ultrafast internet and connected communities, that seems crazy! Edtech is a really exciting place to be at the moment, there are so many facets to it. I’d say that MakerClub is definitely at the forefront of the educational maker movement. We’re really pushing for change in schools, working with all kinds of marginalised groups and are using emerging technology in a way that hasn’t really been done before.

What’s your biggest challenge on the journey of raising “the next generation of engineers, designers, and creatives”?

The kids love making and designing, the parents often know how important it is and business are crying out for new talent. The main problem is school. Design and Technology have been dropped from a load of secondaries and academies. There has been a real shift away (in the UK at least) from arts or creative subjects in favour of more traditional subjects. The siloed nature of school means that students often don’t see how different specialities need to come together to foster innovation.

Schools are underfunded, teachers are overstretched and the equipment that’s being used is either outdated or not being used to its full capability. This is leading to a generation of kids that are being taught in a way that doesn’t excite or inspire. That’s why we started our regional MakerClub’s. We’re opening spaces in Bournemouth, Cambridge, London and Birmingham over the next few months and hope to have 15 running by next year.  These are spaces where young people between the ages of 7 and 16 can use the latest equipment, have expert mentors on hand and can be encouraged and work on their own inventions. We believe that this is the best way to develop their skills. 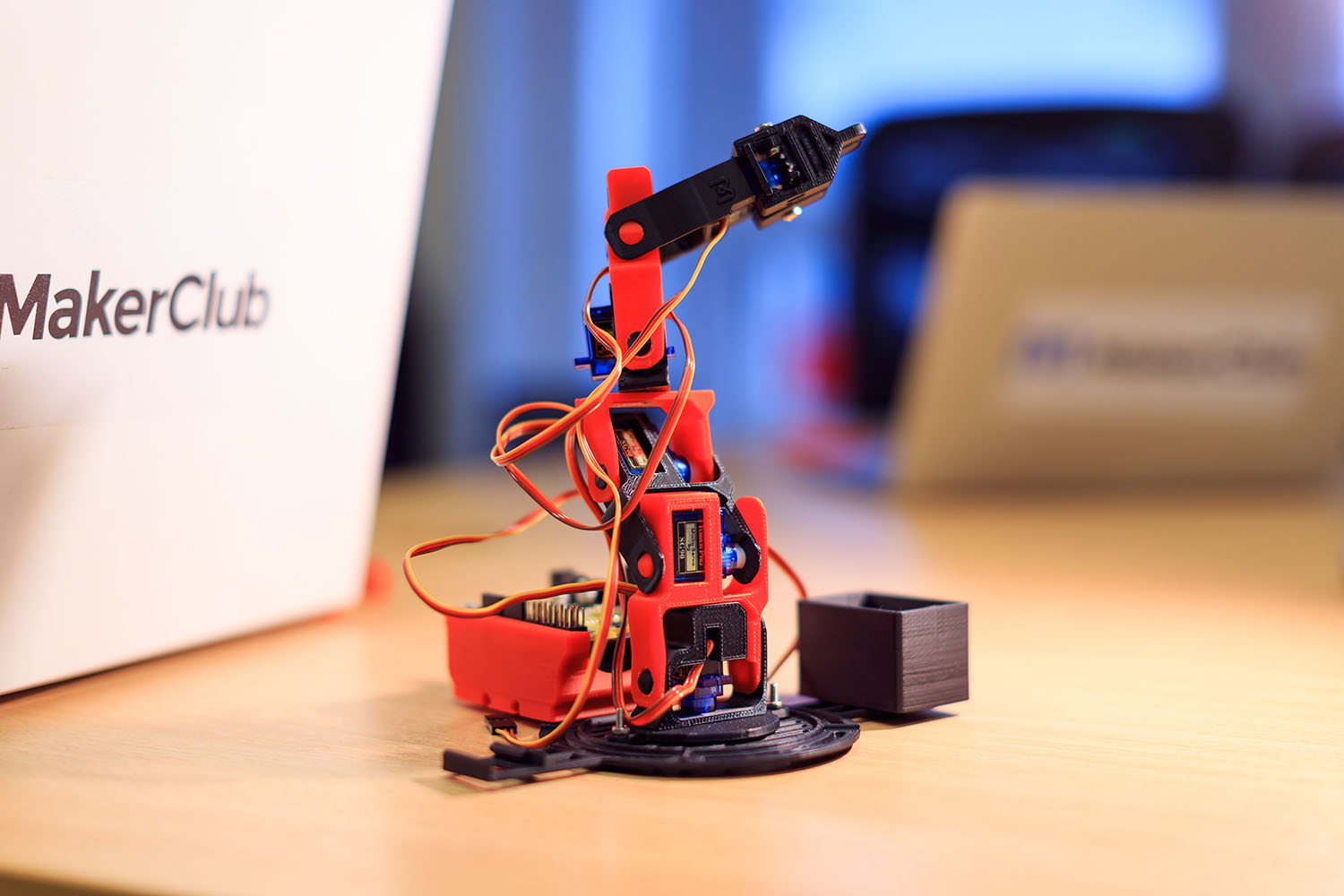 The creative economy is an integral part of the UK – it’s one of our biggest and best exports.

In Making is Connecting, David Gauntlett argues that by making, people are building connections. Is MakerClub a formula to a more interconnected world?

I’d say so. We actually worked with David last year on a couple of MakerClub projects and a lot of our ethos and internal mission statements have been influenced by his work. I think the Maker Movement has connected a whole range of people around their shared love of building and crafting cool stuff together. MakerClub is an extension of that and we hope to inspire that same sense of community within the projects that we inspire and the teams of young people that will create them.

How do you see the so-called creative economy and what’s the future of 3D printing and IoT?

The creative economy is an integral part of the UK – it’s one of our biggest and best exports. From theatre and film through to design and innovation, the UK has a proud history. The problem is, we’ve become complacent. We are not investing enough in young talent, the emphasis in schools has shifted in favour of more classically academic subjects and funding is being pulled for creative projects.

The future for IoT and 3D printing is bright. They’ll be 200 billion internet connected devices by 2020 and a whole range of new industries like smart home technology and driverless cars will make people’s lives easier and safer. 3D  printing is just getting started. It’s getting faster, cheaper and more accessible every day and with companies starting to experiment with conductive materials, it won’t be long until fully electronic parts can be printed directly in your home. We hope MakerClub will be the home of many of these inventions, available for an instant download in one click. This will be the beginning of instant physical products on demand. 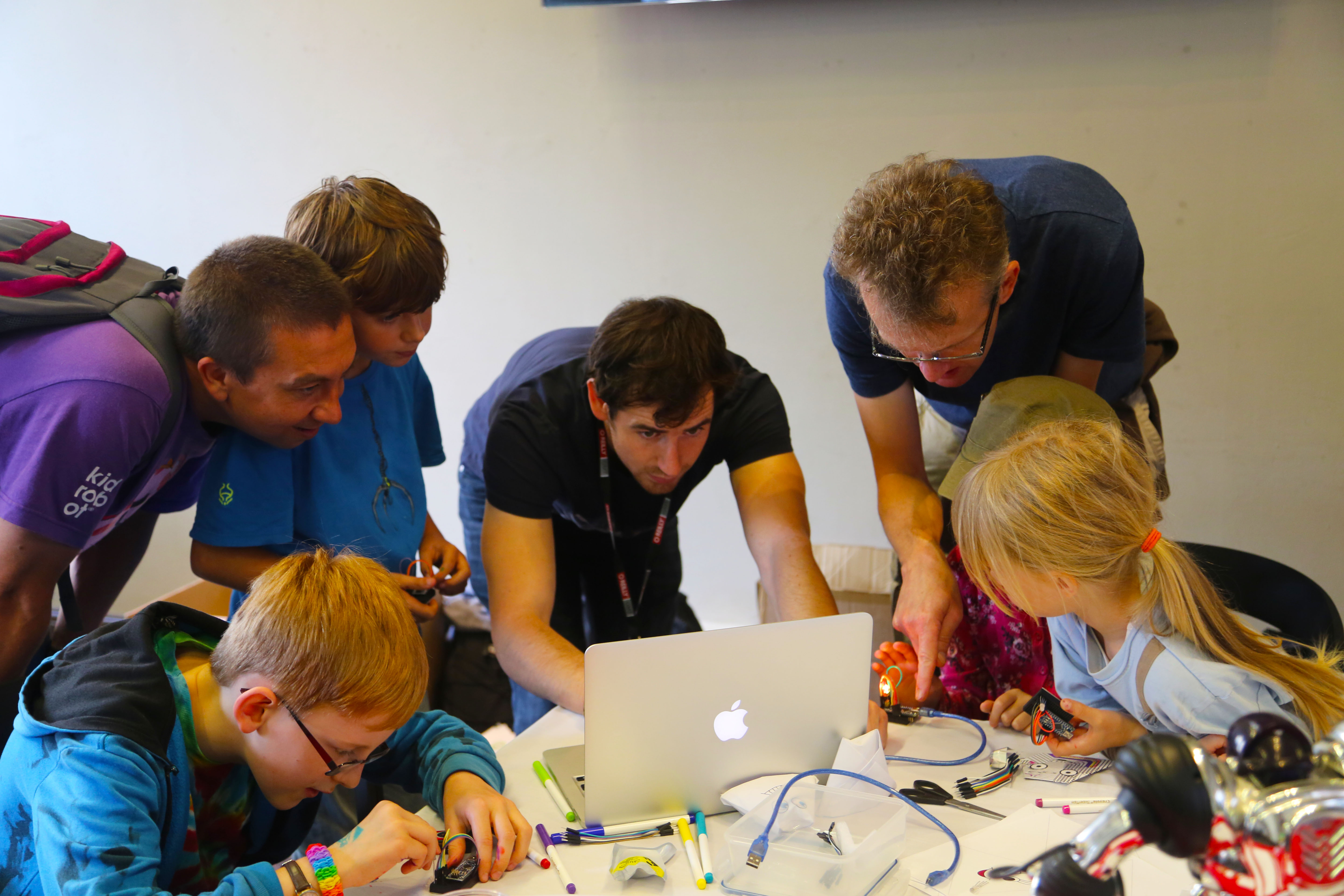 Just recently Barclays announced the launch of the Barclays Digital Labs.  Tell us more about your cooperation with the Labs.

One of the biggest problems we had when we first started out was that there wasn’t really that many “makerspaces” in the UK where we could run workshops. This changed when Barclay’s announced EagleLabs. Barclays have spent a load of money, turning their old branches into community “makerspaces” and startup offices for young companies who need affordable space. They already had a great history of working with kids in the digital sector through Code Playground and the Digital Eagles.

We approached them about running sessions in the spaces, which are kitted out with laser cutters, CNC machines and 3D printers and struck up a great relationship. We are now running young people’s workshops in three of their spaces and will be rolling out at the rest of them over the next 12 months. It’s such a great initiative and we will be working with them on some big announcements over the coming months.

What’s next in your pipeline?

World domination! We’re looking to expand from the UK to mainland Europe and the US as well as release a whole new bunch of super exciting maker projects.

How Founder Centric “teaches startup education”  |  Where to upskill in London