By Alice MurrayOctober 22, 2018For Talent

The WeWork Creator Awards are coming to London!

This Thursday (25th October), startups from all over the world will battle it out to try and win over $700,000 in funding at one of the most hotly anticipated events this year.

With special guest Ashton Kutcher and musical performances from Diplo, you can guarantee that it is going to be a star-studded affair. But did you know that there is also a jobs fair as part of the celebrations?

Here are just 6 companies that will be hiring on the night.

If you like decadent spa breaks, opulent holidays and finding a bargain then you have probably heard of Secret Escapes.

The worldwide brand began as a simple idea in 2010. Now, 8 years later Secret Escapes is one of the biggest travel websites in the world with over 500 members of staff. Their growth has been exponential and shows no sign of slowing down.

Every month, nearly 80 million people read Bustle publications around the world. The female-focused digital group is redefining the media space.

Founded in New York in 2013, the company now has offices in Los Angeles and London. Swing by their stand at the WeWork Creator Awards to see what roles they are hiring for.

Houzz is a website and online community about architecture, interior design, landscape design and home improvement. The company has two offices, one in London and one in Berlin. As you can imagine their office spaces are pretty impressive. The UK office boasts an Italian dressing room, a Mediterranean meeting room and a roof terrace! What more could you want?

In a nutshell, Bazaarvoice connects brands and retailers with their customers so that they can make better-informed decisions.

Founded in 2005, Bazaarvoice is headquartered in Austin, Texas with offices in North America, Europe and Australia. Employees at the company enjoy lots of different perks like free eye tests, generous annual leave and childcare vouchers.

Come work with us! Jobbio will be hiring at the WeWork Creator Awards in London. We’re looking for ambitious, hard-working and enthusiastic people to join our expanding London team.

We might be just a little bit biased but we think it’s a great place to work. If pizza and beer parties, free yoga and regular Bake Offs sound like your thing then make sure you swing by and say hello.

Flatiron School is a global school providing software engineering courses in just 15 weeks.
They are currently hiring for a number of positions based in London. Make sure you check them out after the awards show. You won’t regret it! 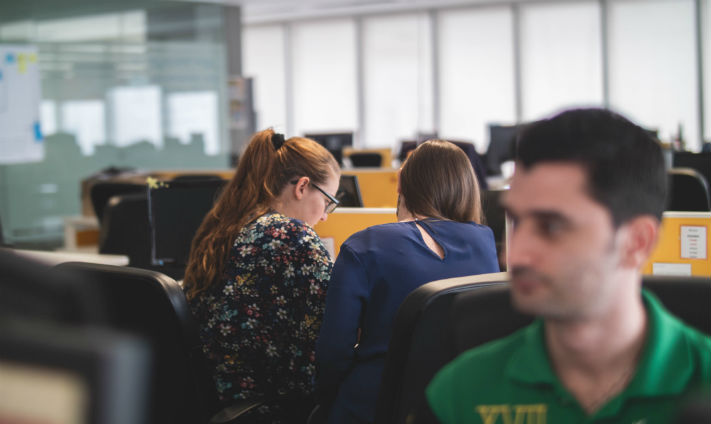 First Grown Up Job Guide: Dealing With a Workplace Bully

First Grown Up Job Guide: Dealing With a Workplace Bully