The Ultimate Guide to Living and Working in Toronto

Are you considering a move to Canada’s biggest and best city? (sorry Vancouver!).

Toronto or T-dot has a population of 2.8 million people. Located in the South East of the country, it’s just a short two-hour flight from New York City but don’t be fooled. This city has an identity all of its own.

From its amazing food scene (their poutine is better than Montreal’s, FACT!) to its stunning scenery, Toronto is one of the biggest cultural melting pots in North America.

The lure of jobs, a vibrant city life and of course friendly Canadians has been bringing people to this metropolis for a long time. If you want to move to the land of Canucks then make sure you read our ultimate guide first.

Torontonians have the longest commute in Canada. On average they spend a total of 34 minutes getting to work according to the last census.

This doesn’t seem so bad when you compare it to the average in London (84 minutes) but this is still well above the national average of 26.2 minutes.

A small percentage of Toronto residents (16%) spend over an hour commuting to work each morning. What’s taking them so long? Public transport of course! On average, people taking public transport spend about 45 minutes getting to work. People who drive only take 24 minutes. 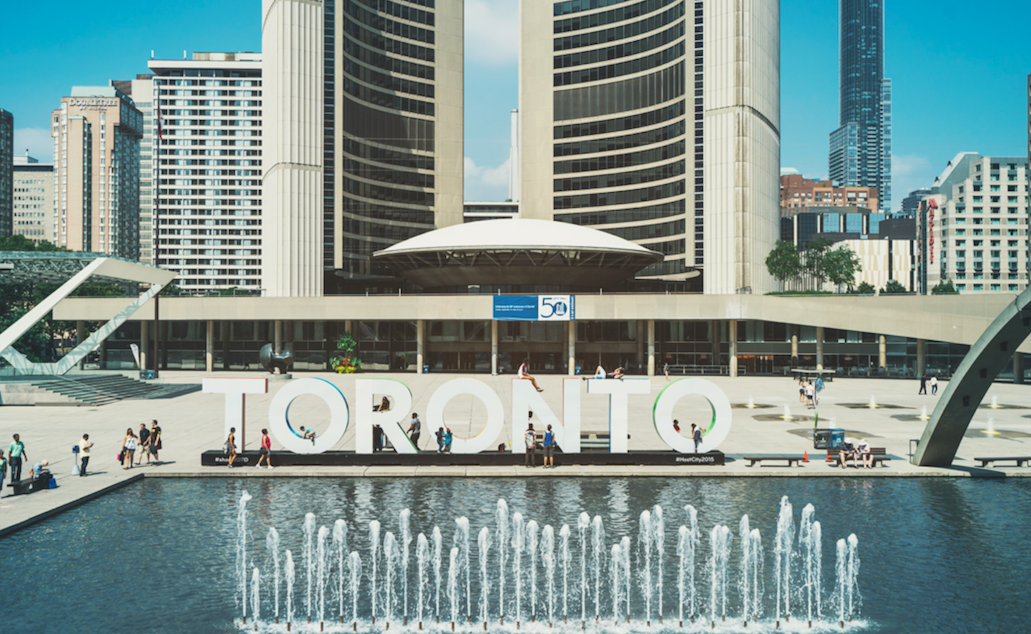 Pretty much all public transport in Toronto is controlled by the TTC (Toronto Transit Commission) so you better get used to it. The TTC is comprised of the city’s subway, streetcar and bus system. A single fare costs $3.25 while a monthly fare will set you back $146.25

It’s notoriously unreliable, especially in the middle of winter or height of summer but tens of thousands of people still use it to criss-cross the city daily.

Toronto’s subway is comprised of four lines spread out across the city. It’s a mixed system with 3 rail lines operating underground and one metro elevated above ground.  It’s one of the quickest ways to get around the city.

The Toronto streetcar system is a network of eleven streetcar routes. It is the largest and busiest light-rail system in North America. Streetcars (or red rockets as they are deceptively called) are mostly located in downtown Toronto near the city’s waterfront.

There are more than 172 bus routes in Toronto that cover most parts of the city and its surrounding suburbs. Toronto buses run 24 hours a day, however, services are not as frequent at night. 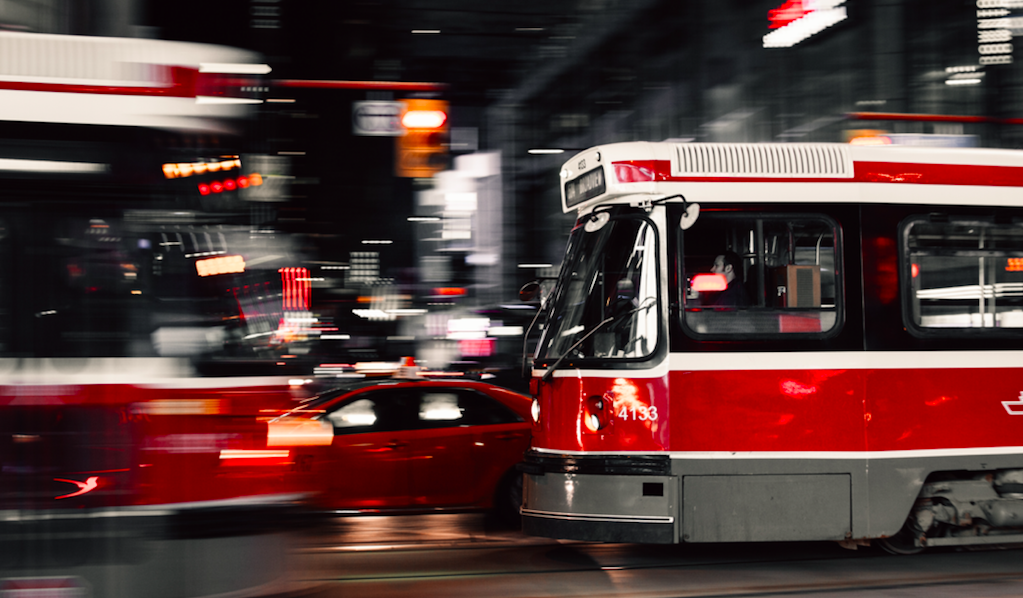 35% of all Toronto jobs are based in the downtown area according to the most recent employment surveys. Here are some of the main sectors.

This sector includes hospitality, healthcare and customer service roles. The service industry represents 12.4% of Toronto’s total employment. Over the last five years, the sector has grown by 25,090 jobs. The city’s booming tourism industry is a huge contributing factor to this growth.

Retail plays a huge part in Toronto’s economy and accounts for 10.1% of all employment. Downtown Toronto is home to one of the longest streets in the world: Yonge Street. This whopper of a road has over 600 retail stores, including independent boutiques, chain stores and bargain shops. The area also holds a number of impressive malls, like the Toronto Eaton Center.

Toronto has a booming tech scene. The city has the largest hub of technology-focused businesses in Canada (14,700+ firms including Google, Facebook and Microsoft as well as homegrown successes like Shopify). Toronto’s tech scene provides more than 183,000 jobs and is mainly located in the Kitchener-Waterloo area.

The Canadian financial industry which includes banks, investment firms, pension funds and insurance companies is mostly based in Toronto. The city is home to the head offices of Canada’s five largest banks and is responsible for over 40% of all financial services employment in Canada. Most finance companies can be found in the downtown area. 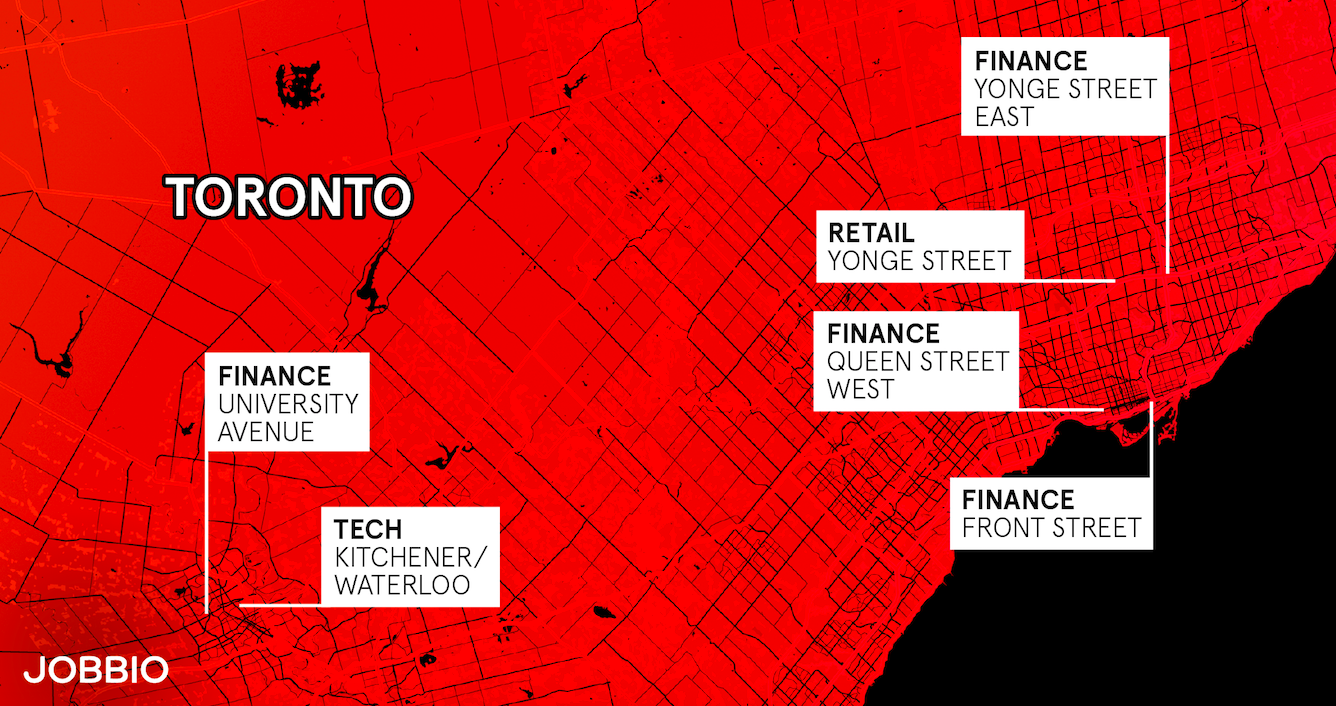 In general, people who are not Canadian citizens or permanent residents will have to apply for a visa to work in Toronto. Thankfully, the process isn’t overly complicated.

The first step should be trying to secure a valid job offer from a Canadian employer. There are two different types of job offers, a temporary job offer (for a set period of time usually 6 months- 1 year) or a permanent job offer (no set time).

While this step is not necessary, having a job offer significantly increases your chance of getting approved. You can find out more about obtaining a visa here.

In Canada, your income tax is made up of a combination of federal and provincial tax rates. For example, if you are working in Toronto you will have to pay Ontario provincial tax. The value of this tax depends on how much money you are earning. In Canada taxable income includes employment income, rental income and money you receive through some government programmes.

Like most countries, Canada has multiple tax credits and deductions which reduce the amount of tax that you will pay. Canadian residents must fill in a  tax return form each year to make sure that they are paying the correct amount. You can find out how much council tax you will have to pay here.

Wages in Toronto are higher than anywhere else in Canada. According to PayScale, the average Toronto salary is $47,914.  Here are some more examples.

A variety of factors influence the rent prices in TO. These include vacancy rates, rent control guidelines and the housing market. In recent years Toronto has seen a huge spike in rental prices. Between 2016 and 2017 the average cost rose by 33%.

At the moment 47% of Toronto renters spend more than 30% of their income on housing.

If you want to rent in Toronto there are two main options: private apartments and condominiums. Private apartments were built with the purpose of being rented while condominiums are rented out by individual condo owners. Current rent control laws only apply to units built or occupied before 1991. 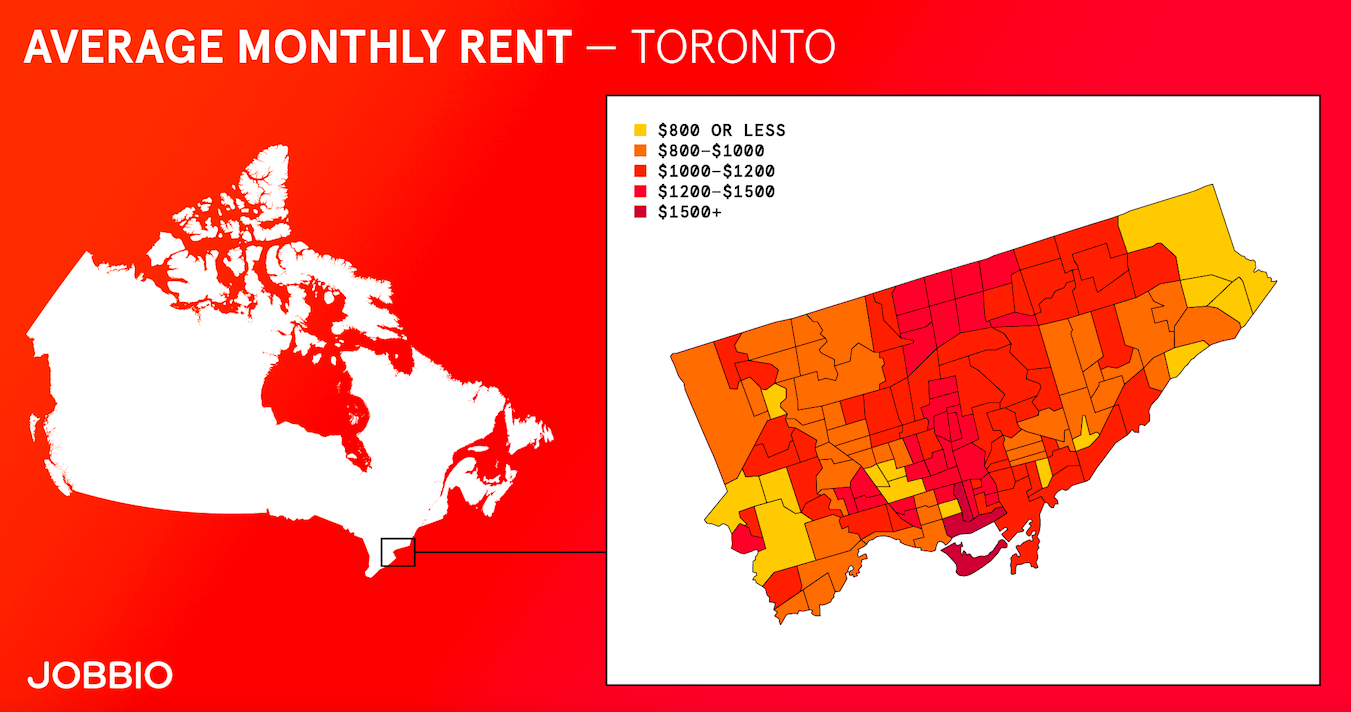 Toronto is the 6th most expensive city in North America. If you want to make the most of your time there then you will need to budget accordingly.

Lunch in the business district will set you back $18 on average while a coffee in an expat area of town will probably cost close to $5 according to Expatistan.

The Nutritious Food Basket, a food cost calculator on the City of Toronto website states that the monthly cost of healthy groceries for a single young professional is around $300 per month.

If you’re into fitness gym memberships range from $60 per month for budget gyms like YMCA to $100-$200 for more specific studios and yoga classes.

Yes, the city is pricey but there are things that you can do to make your money go further.

If you want to visit a museum you should go when they are free. The AGO (Art Gallery of Ontario) is free on Wednesdays. The Bata Shoe Museum is free on Thursdays and the ROM (Royal Ontario Museum) is discounted on Friday afternoons.

Rainbow Cinemas (the cheapest cinemas in Toronto) are half price on Tuesday nights and most bars and nightclubs have free entry before 11pm. If you’re savvy you can save a lot of dollars. 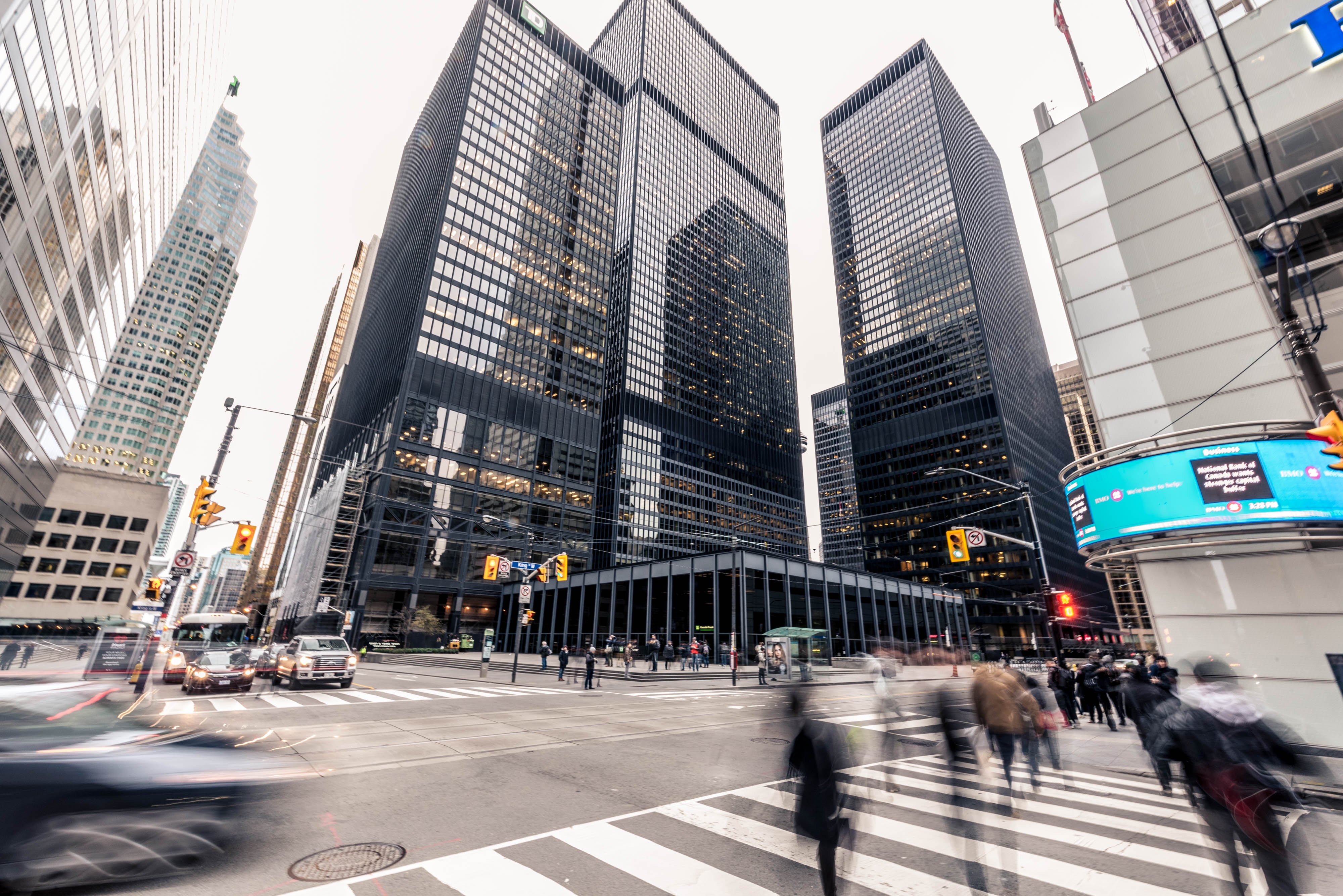 We reached out to five people who have lived and worked in Toronto to find out their advice for newbies. Here’s what they had to say.

”Spend lots of time getting lost in Kensington Market, it’s filled with interesting people and quirky places to eat, drink and chill.”

”It’s an expensive city and the job market is extremely competitive. Start the job search early and make sure you have saved enough money for at least 3 months expenses.”

”You can’t just nip to the local shop to buy alcohol in Toronto. There are beer shops where you can just buy beer and then there are the LCBO where you can buy everything else. You soon get the hang of it but it definitely takes some getting used to at the start.”

”Get familiar with the TTC so that you can explore all the different neighbourhoods. Also, finding a place to live is as hard as finding a significant other.”

”Save up a good bit before and come with an open mind. Don’t expect everything to happen straight away. There is a large possibility you will take a cut in wages but it’s worth it!” 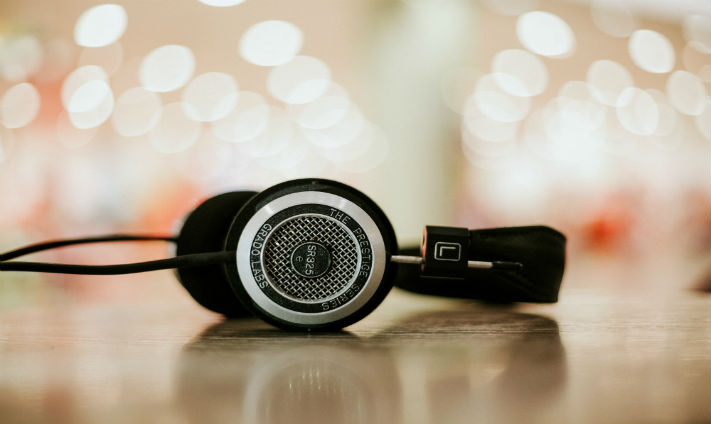 Podcast Review: How Did You Get Into That? By Grant Baldwin

Podcast Review: How Did You Get Into That? By Grant Baldwin