The Ultimate Guide to Living and Working in Auckland

New Zealand is a popular choice for expats, with a moderate climate, beautiful scenery and impressive work-life balance, it’s not hard to see why so many people want to live there.

For years Auckland has attracted the biggest portion of expats. In fact, The city grew by 121,000 people, in the past three years and 70% are aged between 15-35.

So, what’s all the fuss about? We decided to find out.

Unfortunately, this rapid population growth has contributed to a congestion problem in the city. Auckland’s traffic has become notoriously bad.

According to the AA, Aucklanders spend close to 80 hours stuck in motorway traffic congestion each year.

Between the hours of 7am and 9am drivers typically travel at an average speed of just 43 km/h on Auckland motorway. This slows even more on arterial roads – where drivers crawl at an average of just 34 km/h. 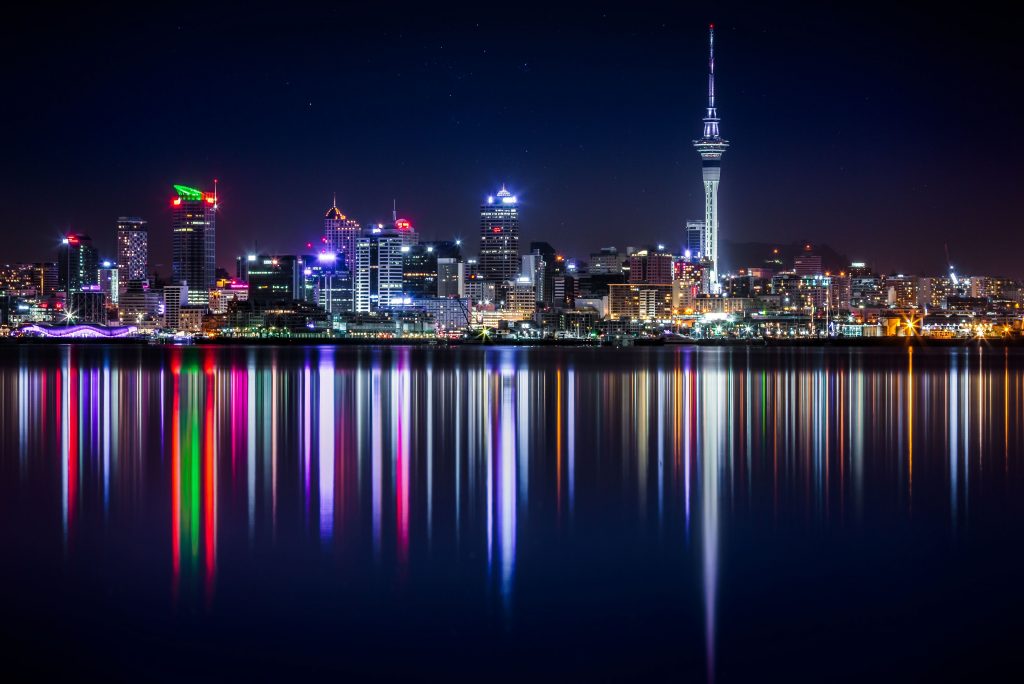 Thankfully there are plenty of public transport options in Auckland. If you’re going to be using these services frequently then you should invest in an AT HOP card. The card is essentially a travel pass that gives you 20% off the fare price. The card costs NZ$10 and must be topped up with a minimum of NZ$5.

Auckland’s bus network is the most extensive public transport network in the city. The service includes CityLink, Innerlink, OuterLink, MetroLink and NiteRider. If you don’t have an AT HOP card then you can pay the driver in cash, small change is always appreciated.

There are 41 train stations dotted along four main lines, The Western Line, Southern Line, Eastern Line and Onehunga Line. Electric trains provide a comfortable and quiet ride with over 3000 services every week.  Pukekohe services are the only remaining part of the network with diesel trains.

The Auckland Central ferry terminal is known as the Downtown ferry building. It is located at the end of Queen Street. The ferry is a very common mode of transport in Auckland due to its coastal location. You can use the service to go to the Hauraki Gulf islands or just to cross the harbour. It’s important to note that you can only use your AT HOP cards on commuter routes. 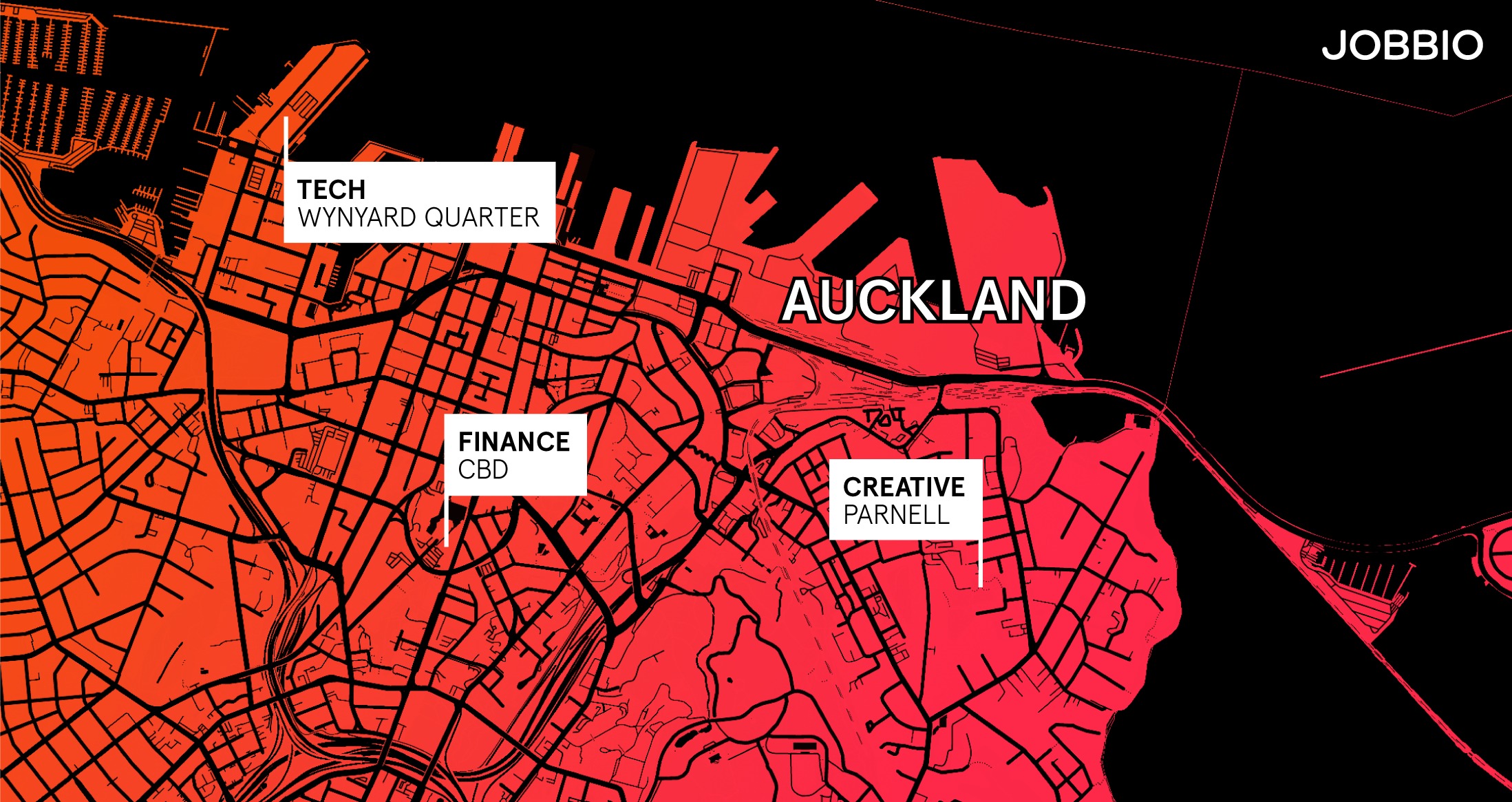 Auckland has a thriving tech scene that covers various different fields including big data, fin-tech, med-tech and cybersecurity. Of all New Zealand ICT companies, 58% are based in Auckland. This is in part due to government and investor networks who are supporting the sector and helping build technology hubs, incubators and accelerators.

In 2018, New Zealand’s hospitality sector achieved record sales of over $11.2 billion. The total number of employees employed in NZ hospitality is now just under 130,000. Auckland dominates the employment opportunities in this sector and the region now employs just under 50,000 hospitality workers.

Financial and insurance services play a huge part in New Zealand’s economy. In the year ending March 2017, the sector contributed $13.4bn to the GDP. There are 25 registered banks and numerous financial institutions in New Zealand, most of which have their main offices in Auckland.

Half of all people employed in the creative sector in New Zealand are based in Auckland. From film and TV production to animation and outstanding theatre you can find it all within the city limits. In terms of employment, this sector grew by 2.2 per cent each year on average between 2000 and 2016. The highest concentration of creative companies can be found in the Parnell district (according to this study). 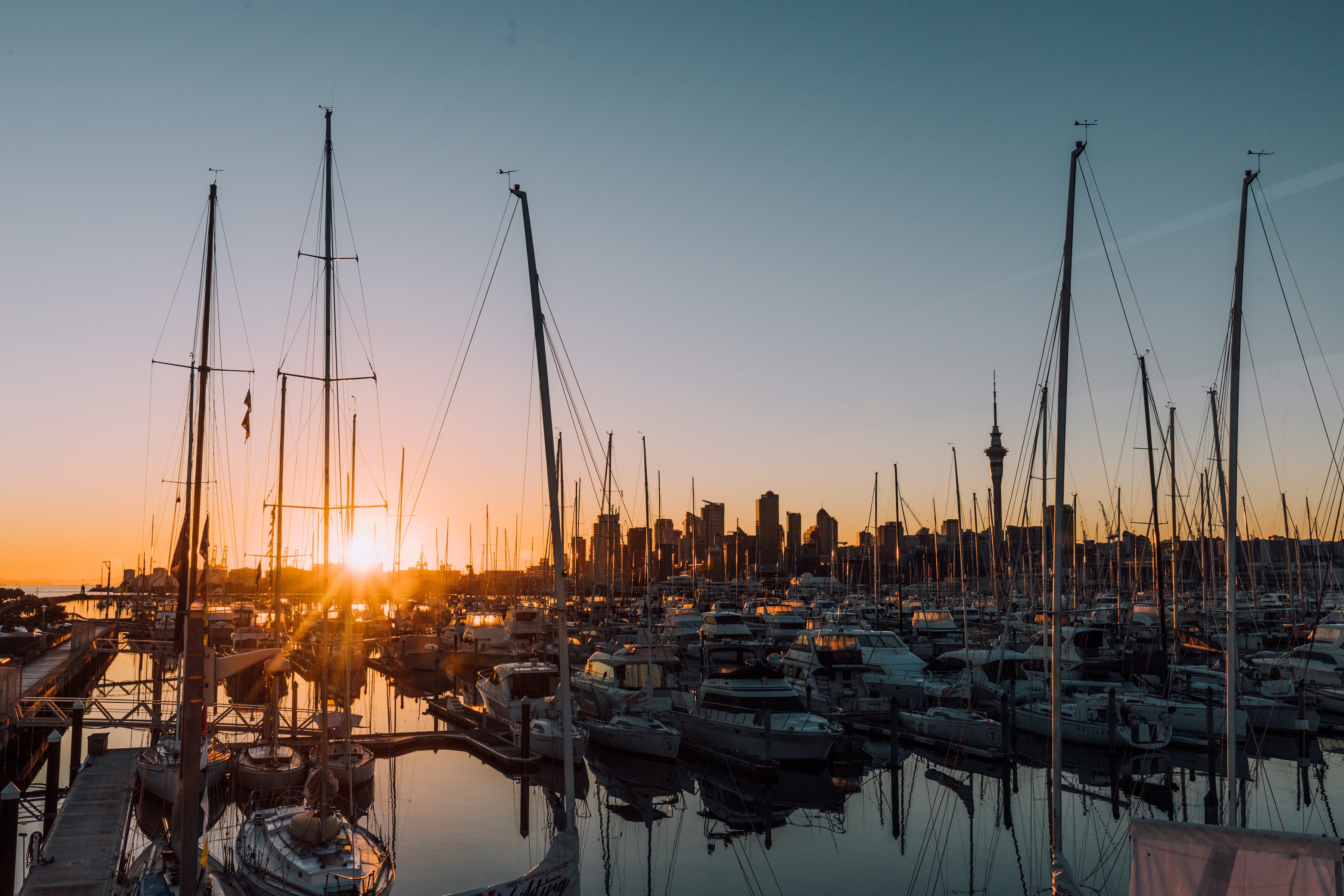 You don’t need a visa to work in New Zealand if you are an Australian citizen or permanent resident. However, if you don’t fall into either of those two categories then you will need to apply for one before you leave.

The New Zealand Department of Immigration website has a VisaOptions tool to help applicants find the right visa for them. 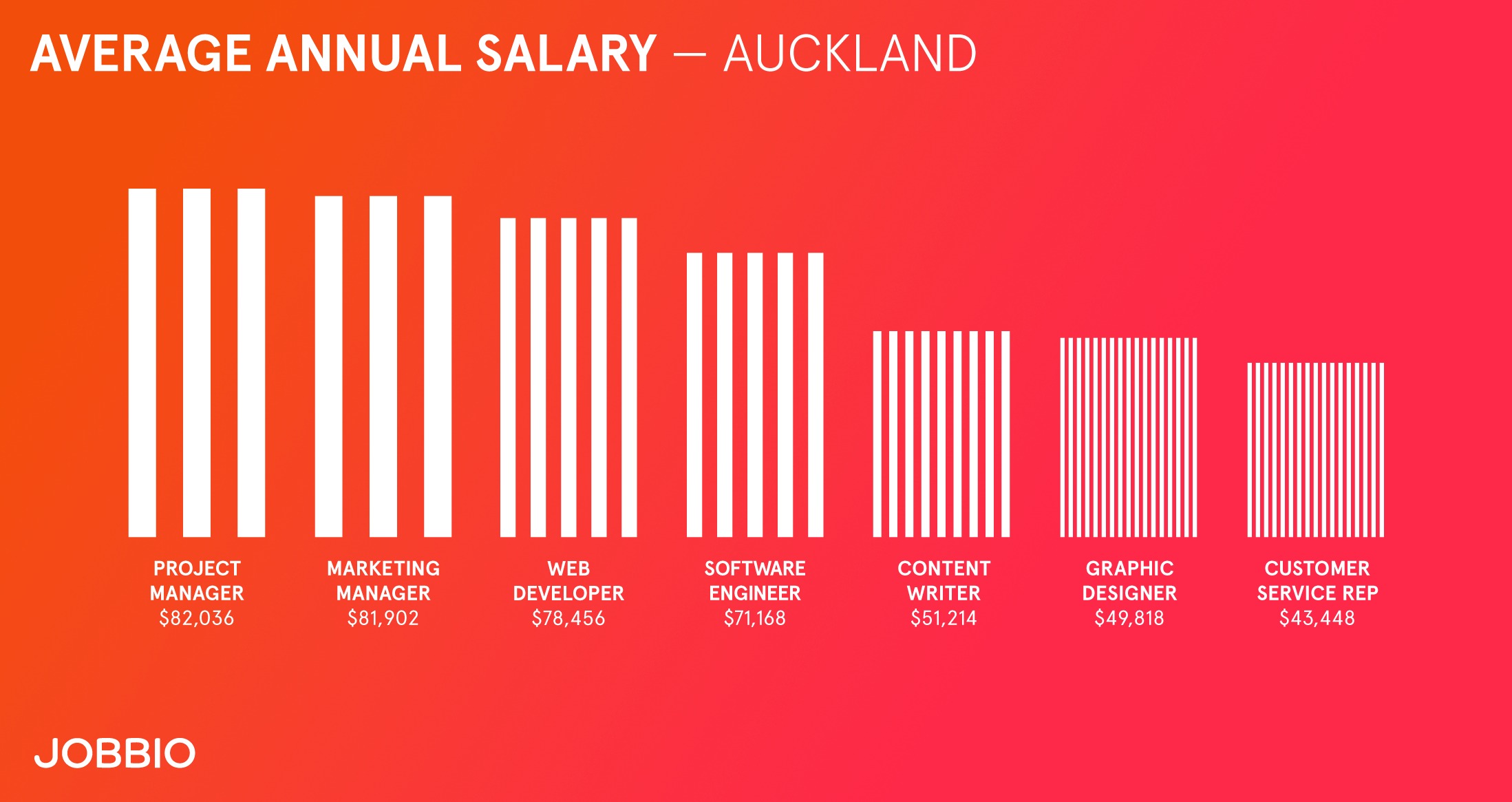 The good news is that the tax system in NZ is relatively easy to navigate. In fact, in 2016 the US-based Tax Foundation ranked New Zealand’s overall tax system as second in the developed world for its competitiveness – and top for its individual (personal) taxes.

As soon as you arrive in New Zealand you will need to apply for an IRD number. Anyone earning income will have tax deducted through the PAYE (Pay As You Earn) system. If you don’t have an IRD number you will be taxed at the highest rate.

NZ also has a Goods and Services Tax (GST). This flat rate tax is added to all purchases and currently stands at 15%.

Sharing a house or ‘flatting’ is common in New Zealand, especially if you are young and/or do not know anyone in the city. Most people advertise on websites like TradeMe, Flat Finder or EasyRoommate.

Rental prices vary depending on the neighbourhood. Below you can find a breakdown of the average rental price for a three bedroom apartment. 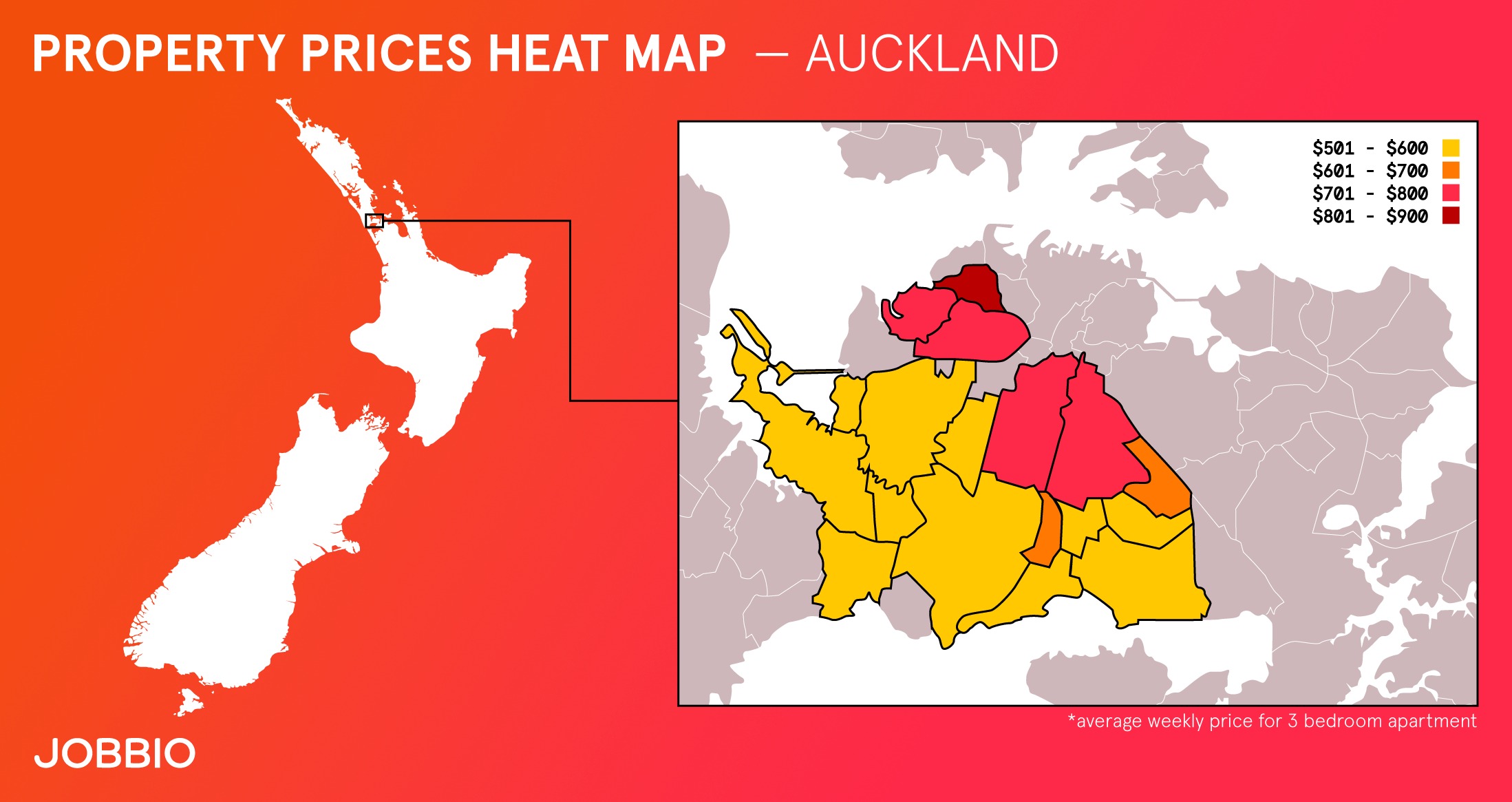 Ponsonby is situated close to the CBD which means that it’s a highly sought after area. The neighbourhood has a bohemian vibe with lots of live music and street cafes dotted between bars and vintage shops.

This area has excellent commuter links into the CBD. It’s a great place to live if you want to be near the city but can’t afford the sky-high rents Other selling points for the area include its beautiful rose garden, as well as the Auckland Museum.

Located on Auckland’s North Shore, Devonport is a harbourside suburb which is home to the NZ Navy. The area has excellent restaurants and quirky shops. It’s the perfect place for young families to settle down.

Howick is another seaside suburb. The high street has a variety of shops, bars and restaurants. Howick is a popular commuter area as it allows people to escape the hustle and bustle of city life. 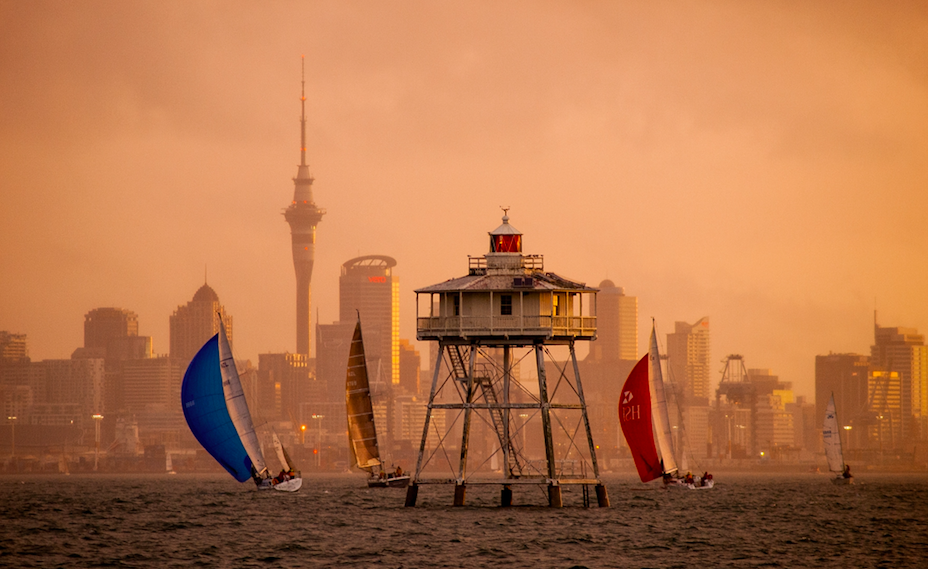 Unfortunately, expenses don’t stop at rent. Auckland’s cost of living was ranked 44th out of 443 cities in the world.

According to Expatistan, two tickets to the local cinema will set you back NZ$36 while a beer in your local pub will cost you NZ$10.

If exercise is your thing then you can expect to shell out NZ$75 for a one-month gym membership. Or if you would rather go to the theatre you will probably spend $195 on two decent tickets.

Farmers markets are held in the city every weekend. They’re the cheapest place to get fruits, vegetables and other fresh items. Sales are really common in NZ, lots of people stock up on food when the items that they use are on offer.

Before you buy any big ticket electrical items always check pricespy.co.nz or if you’re getting a haircut check out special offers on GrabOne.

”Be prepared that this city is more expensive than you think. There is also a housing crisis/shortage. There are tons of things to do if you like the outdoors, a lot of beaches, the Waitakere range, hikes, waterfalls etc.”

”Join the Facebook pages prior to going Auckland jobs/accommodation etc. You can find really good deals on cars/campers on backpack boards.”

”Spark is the best phone network. You can buy sim cards at the airport or their stores are at all the main shopping areas. Check your phone is unlocked (from your previous provider). You can also get cinema discounts on the Spark app.” 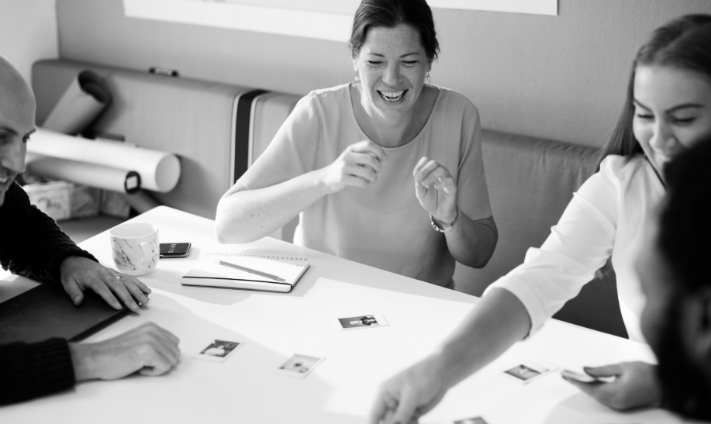