The Ultimate Guide to Living and Working in Dublin

Are you considering a move to the Big Smoke?

In the past, Dublin was seen as one of the less exciting cities on the periphery of Europe. Expats were attracted to the capital because of the local charm and thriving social scene, not for career development or lucrative salaries.

How times have changed. Today, Dublin is a thriving city right at the forefront of the third industrial revolution. In the past decade, it has grown into a major player in the global careers market, attracting companies from around the world who are eager to base their European headquarters on the shores of the Liffey. This expansion looks set to continue in the wake of Brexit.

If you are thinking about making a move to Dublin’s fair city then make sure you read our guide first. Here is everything you need to know.

Each day thousands of people drive into the city from commuter counties like Meath, Kildare and Wexford. This helps to create a daytime working population of 512,449.

According to the census, 1,229,996m people travel to work by car. Walking was the second most popular option with 175,080 people pounding the pavement. This was followed by public transport users at 174,569. 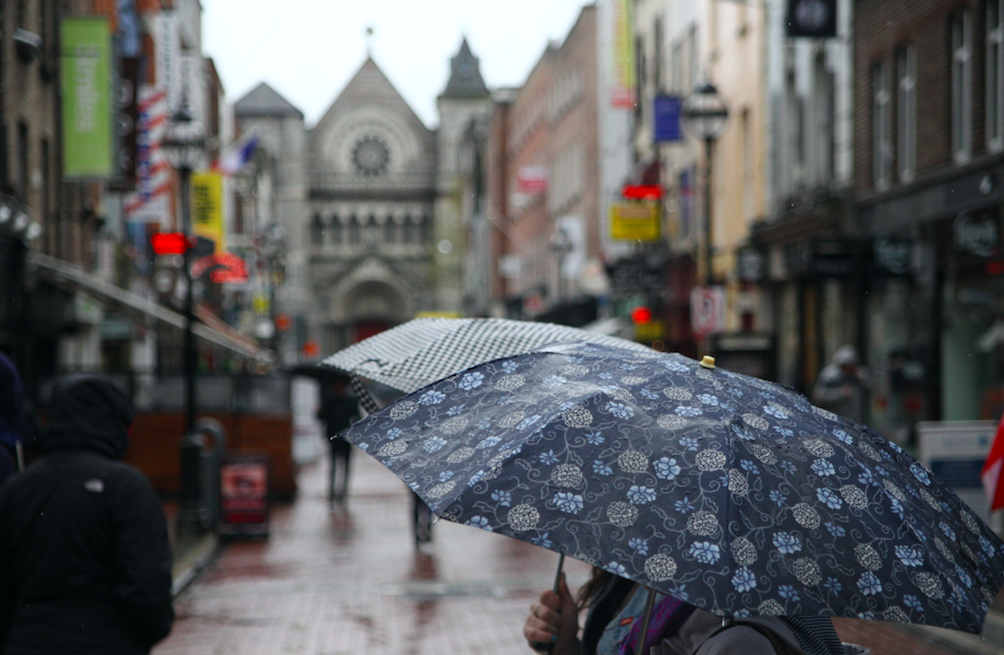 Dublin Bus provides bus services for the city of Dublin and adjoining areas. The fare can range from €2.10 to €3.65 depending on how far you are going or how many ‘’stages’’ you will travel through.

It is much cheaper if you get a Leapcard. A Leapcard is a reloadable smartcard that can be used to pay for travel. Users can top up by a certain amount or load monthly or annual tickets onto the card.

You can also use your Leapcard on Dublin’s trams which are called Luas (the Irish word for speed). The Luas is a relatively new form of transport in Dublin as it only began operating in 2004.

If you don’t have a Leap card you can buy single and return fares from ticket machines at each stop.

A frequent train service called DART runs along the coast of Dublin, from Malahide and Howth in north Dublin to Greystones in the south.

Other train services from Irish Rail connect Dublin city with suburbs in the west, north and south. Ticket prices vary depending on the length of your journey. You can find out more on the Iarnród Éireann website. 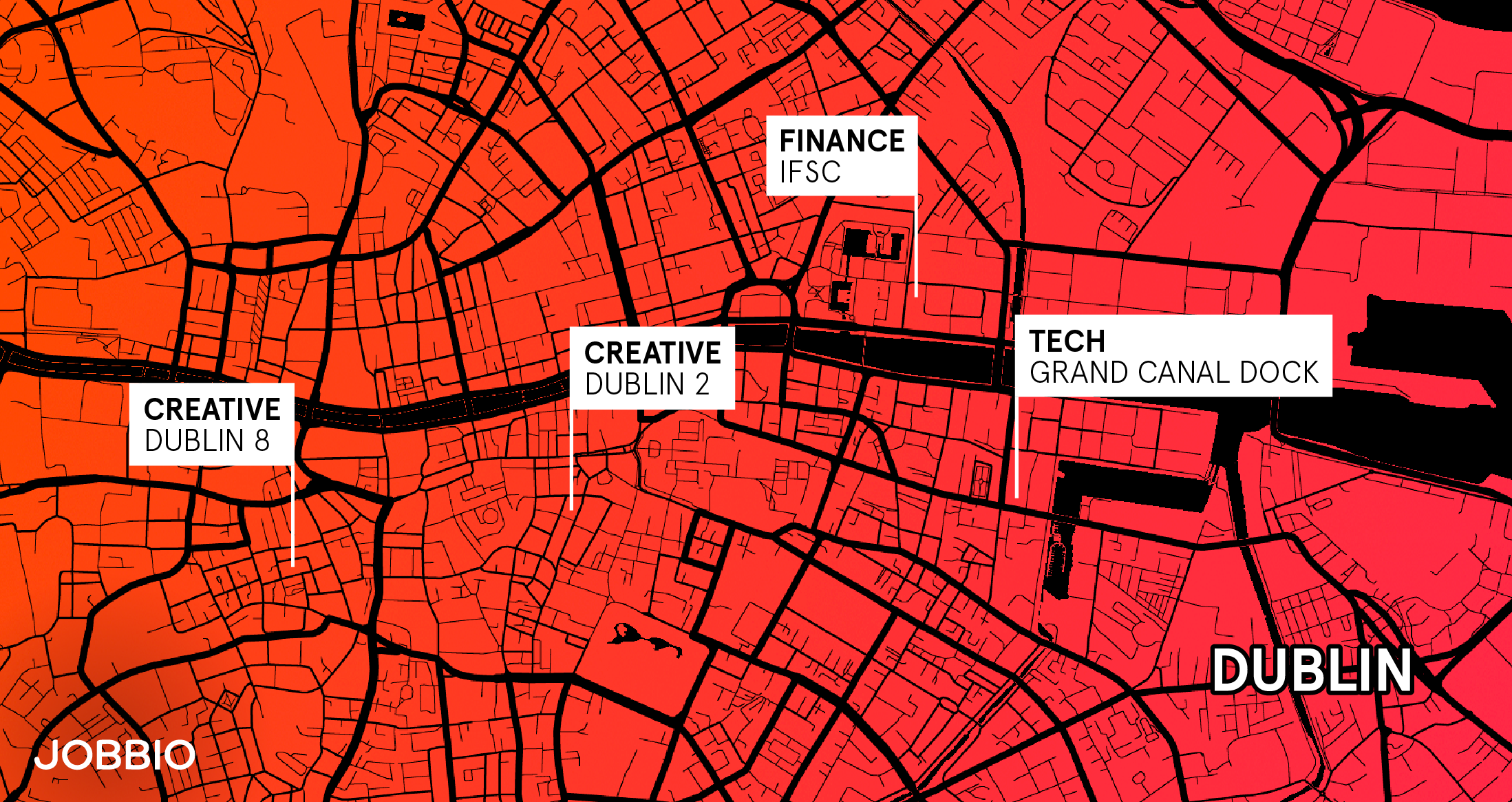 The area around Grand Canal Docks is affectionately known as Silicon Docks because Google, Facebook, Amazon, eBay and Microsoft all have their offices there.

According to a study conducted earlier this year, almost 10% of Dublin workers are software developers. That is higher than any other city in Ireland or the UK.

Dublin has a booming financial scene. Following the recession in 2008, the city has seen a gradual return to business.

The Irish Financial Service Centre (IFSC) on the banks of the Liffey is the main focal point however financial companies are spread out around the city.

Dublin has a huge tourism industry. It is estimated that 10 million tourists visited Dublin last year alone. As a result, the hospitality sector is thriving.

Dublin is well-known for its art, theatre, writing, design and music scenes. There is a vibrant and diverse creative sector within the city that employs thousands of people. In recent years Dublin has seen a greater investment in creative industries so hopefully, this growth will continue. 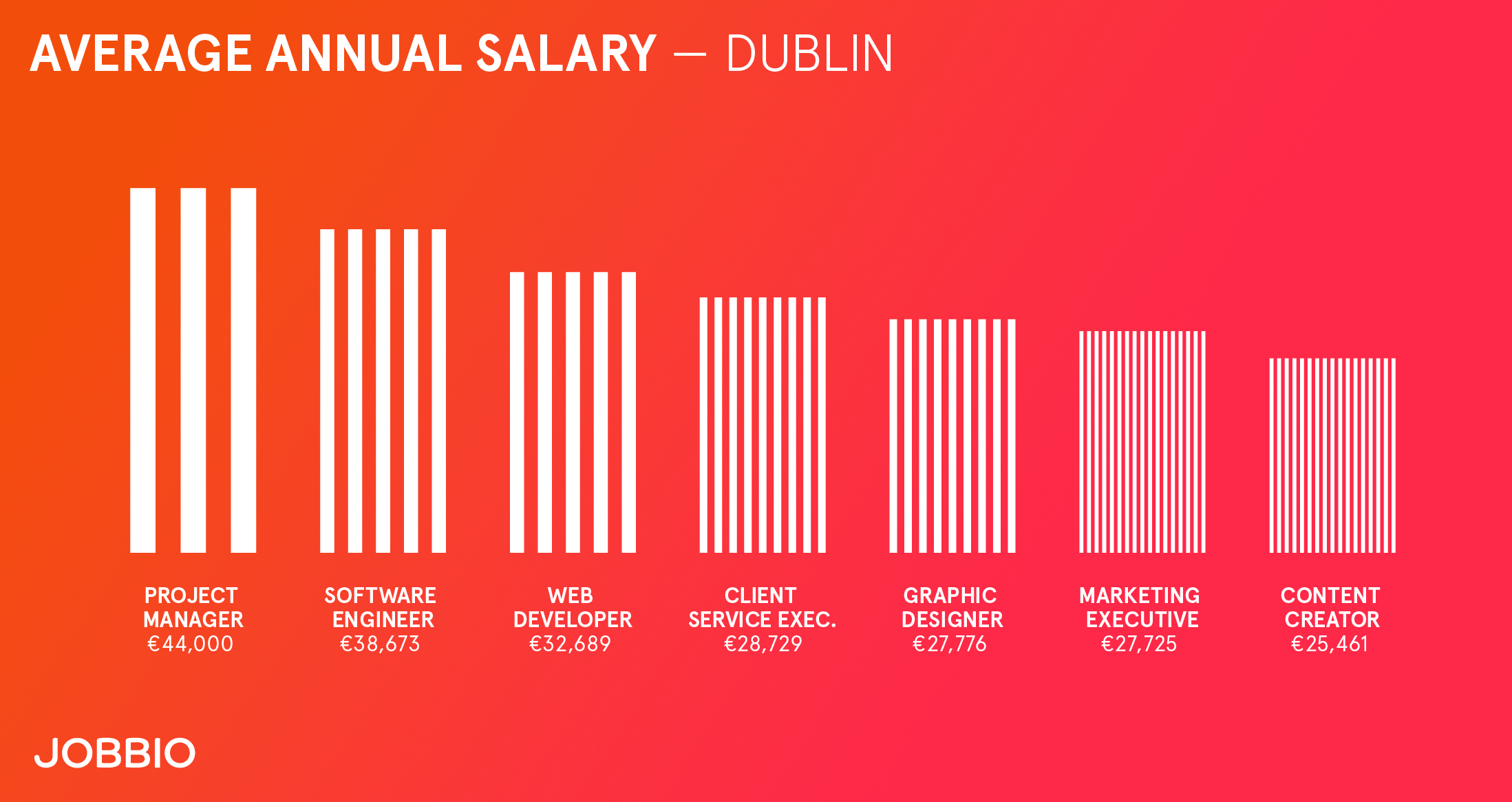 If you’re thinking about making the move to Ireland then you need to make sure that you are legally allowed to work in the country.

You can find out more information about the different types of visas and who can apply for them on the Irish Naturalisation and Immigration Service (INIS) website here. You must apply for your visa online 8 weeks before you are due to enter the country.

Almost all income is liable to tax in Ireland. PAYE or Pay As You Earn is deducted from your wages by your employer on behalf of the Irish government. The amount of tax that you have to pay depends on the amount of income that you earn and on your personal circumstances.

The Universal Social Charge (USC) is also a tax on your income. It is charged on your gross income before any pension contributions or PRSI. You cannot use tax credits or tax relief (except for certain capital allowances) to reduce the amount you must pay.

The tax year in Ireland runs from 1st January to 31st December. At the start of the year, Revenue will send you and your employer a notice of determination of tax credits and standard rate cut-off point.

However, if you are changing job or starting work for the first time, and your employer has not received this information from Revenue or a previous employer, you will be taxed on a temporary basis called emergency tax. 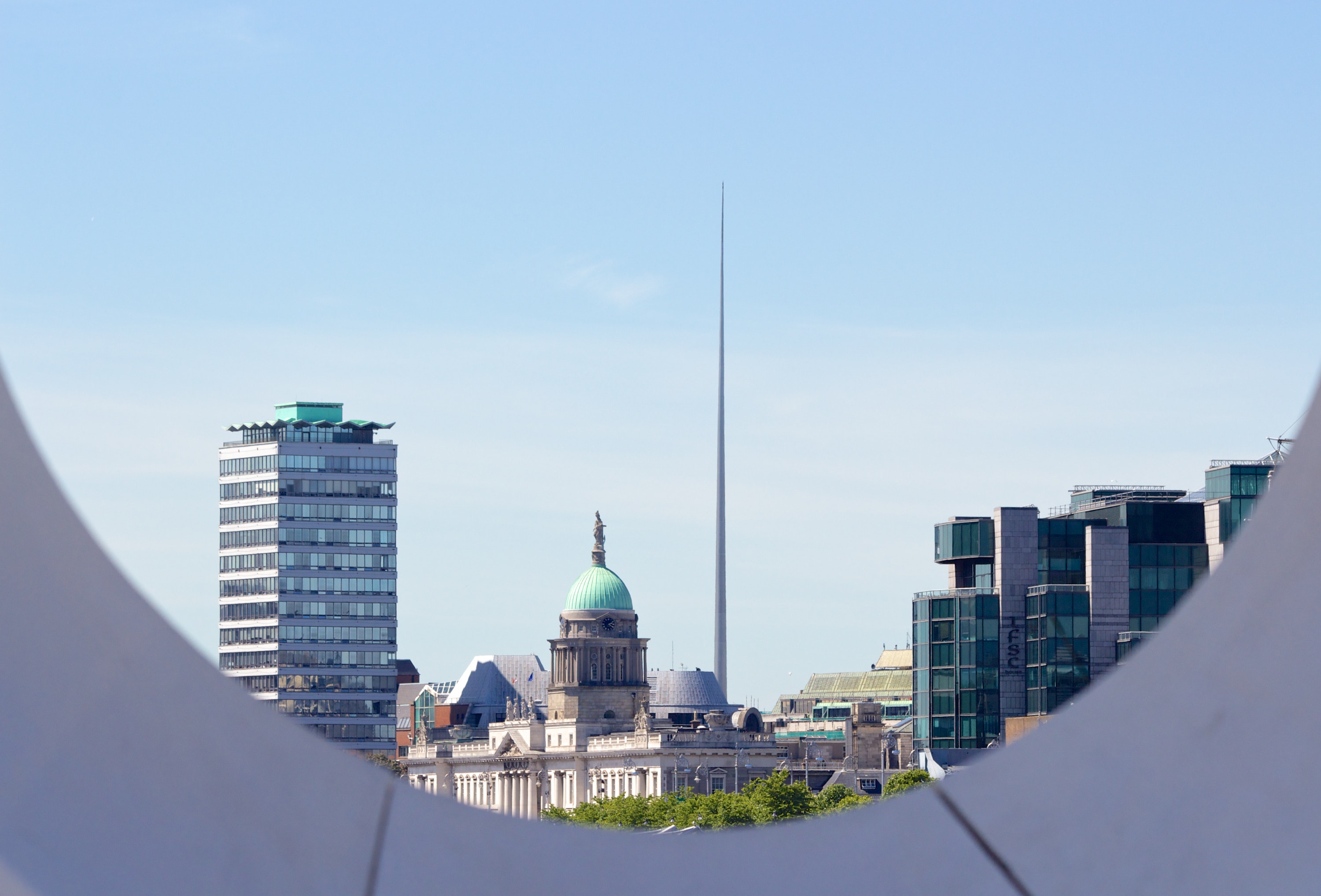 Check out these live roles in Dublin now.

Uh oh, here comes the painful part. Rent in Dublin is notoriously expensive. In fact, it’s up there with cities like London and San Francisco.

According to the Daft.ie rental report for the fourth quarter of 2017, asking prices for rented properties in Dublin rose by 4.5%. They have now surpassed their Celtic Tiger peaks.

The average monthly rent for a single bedroom is €654, while a double room in the city centre will set you back €771 on average.

In recent years there have been calls for more affordable housing in the city centre. Unfortunately, as there is not enough supply for the growing demand it is likely that rent prices will continue to skyrocket in the future.

As you can see from the map below rents are generally more expensive in the south of the city, especially in places like Dublin 4 and 6. 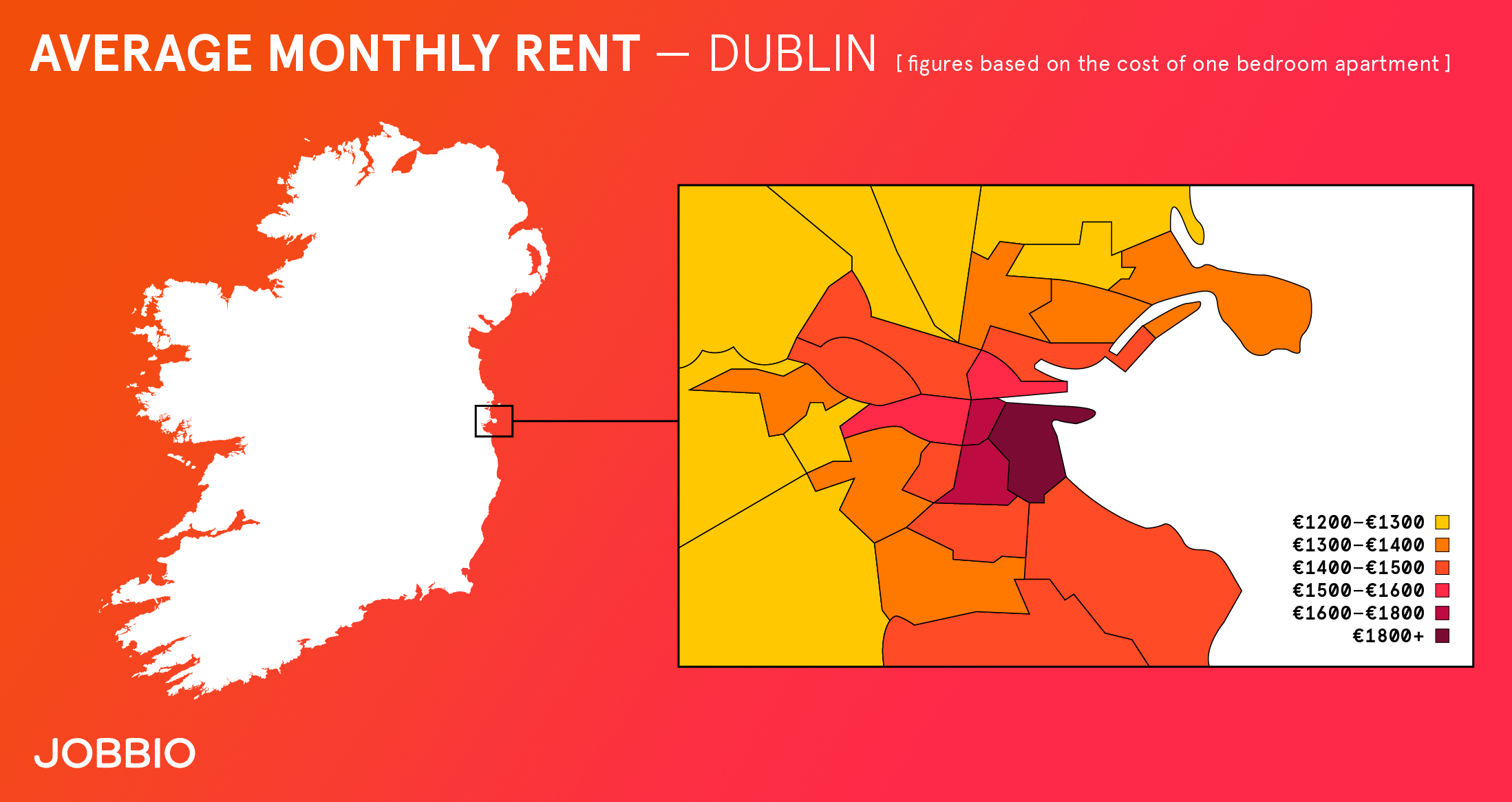 Unfortunately, expenses don’t stop at rent. According to Expatistan two tickets to the local cinema will set you back €22 while a beer in your local pub will cost you €5.87 (if you’re lucky).

If exercise is your thing then you can expect to shell out €44 for a one-month gym membership. Or if you would rather go to the theatre you will probably spend €90 on two decent tickets.

Stay away from the usual tourist traps like Temple Bar or anywhere near O’Connell street if you’re going out for food or drinks.

Avoid Centra and Spar, do your shopping in budget supermarkets like Aldi or Lidl instead. If you can walk or use public transport do it! Taxis are convenient but expensive.

There are lots of free things that you can do in Dublin. Visit Phoenix Park, walk to Poolbeg Lighthouse, pop into the National Gallery or dander around the Botanic Gardens. You’ll never be stuck for something to do, even if you’re stuck for cash.

We asked five people who have moved to Dublin to share their top tips for making the transition.

”Start searching for accommodation as soon as possible. There is lots of competition in Dublin so you will probably have to go to multiple viewings before you get offered a place. Check websites like Daft.ie and Rent.ie regularly.”

”Get out of the city! There are lots of great seaside towns and mountains just a short journey from the city centre. Make the most of your weekends and escape the hustle and bustle.”

”Try to find accommodation near to your work. It is so much easier if you can walk instead of depending on unreliable public transport.”

”I moved to Dublin from Belfast a few years ago. My advice is if you’re renting get a contract from the landlord and get them to sign photos of the house when you move in. Also, choose to move in with fun people and they will show you the way!”

”If you don’t know anyone in the city try to move into a house share. It’s a great way to make friends and find your feet.”

Looking to make a move? Check out these live roles in Dublin now. 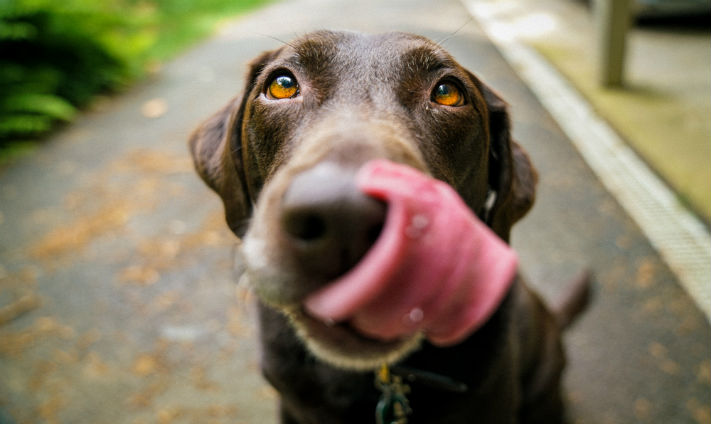