The Ultimate Guide to Living and Working in Amsterdam

By Alice MurrayJanuary 11, 2019For Talent

Are you considering a move in 2019? Amsterdam is one of the most popular cities amongst expats in Europe and it’s not hard to see why. From the fascinating history to the lively social scene and from the tech hubs to the creative spaces, Amsterdam is a great place to work.

In this article, we weigh up the pros and cons of living in the Dutch capital. Enjoy!

Dutch people tend to live close to their jobs. In fact, figures from the national statistics office (CBS) have revealed that nearly four out of every 10 employees work in the same community as their home which is great news if you like lying in each morning.

The bicycle is still the most common form of transport in Amsterdam. Bike usage has grown by more than 40% in the last 20 years. As a result, the city is investing around €120 million on bicycle infrastructure before 2020, €90 million of which is for creating 38,000 new bike parking places. But what is the most common type of public transport? 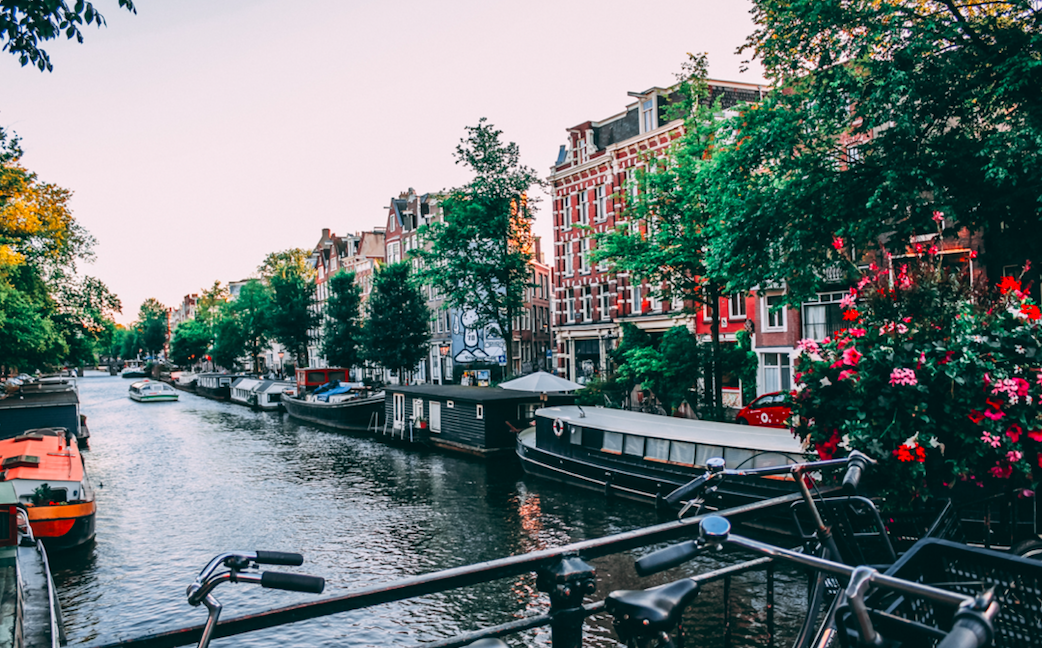 Trams are a cheap and convenient way to get around the city. There are three tram stations, hundreds of stops and 14 different lines that criss-cross the city. You can use a public transport card (OV-Chipkaart) to check in and out at the start and end of your journey. You can also buy a one-hour, 24 and 48-hour ticket from the seller on board.

The Metro serves major areas within Amsterdam as well as the surrounding towns of Amstelveen, Diemen and Ouder-Amstel. There are four lines in total with 52 stations dotted along them. You can use your OV-Chipkaart on the metro or buy a one hour ticket at a vending machine.

Amsterdam has an extensive bus network. The main bus companies are GVB, Connexxion and EBS. You cannot pay for bus trips in cash. You need to a debit, credit or public transport card.

Amsterdam’s ferries provide free connections across the River IJ for pedestrians, cyclists and mopeds. The blue-and-white ferries can be found directly behind Amsterdam Central Station. The large digital countdown boards along the water will let you know when the next ferry is due to arrive/depart. 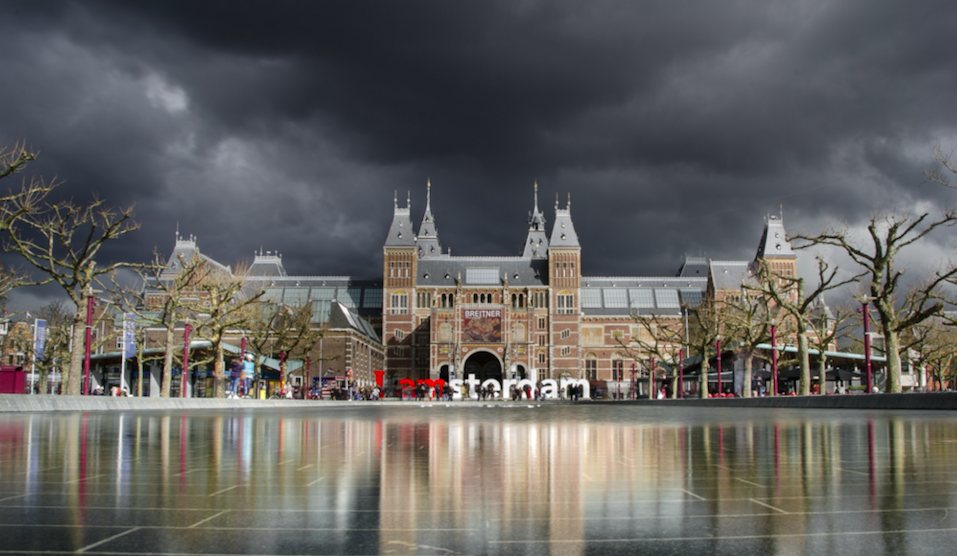 Finance is a huge business in Amsterdam. The city is home to 50 international banking chains, more than 20 major insurance companies and the Amsterdam Stock Exchange.

Much of the financial action happens in Zuidas, a modern, evolving business district south of the city. A number of other professional business districts are positioned around the periphery of the old city, all next to major motorways and transport hubs.

Amsterdam is Europe’s eight most popular city destination for international tourists. In fact, it is estimated that there are ten tourists for every local in the city at any one time, as a result, the hospitality sector is booming.

Most of the hospitality sector is focused in the De Wallen and Jordan districts where you can find two top tourist attractions, Anne Frank’s House and the Red Light District.

Amsterdam has a thriving tech and IT hub. There are roughly 578 international tech companies in the city with big players like Netflix, Apple, LinkedIn, Google, Salesforce and Shutterstock choosing to have offices in the Dutch capital.

The Amsterdam area is also one of Europe’s most buzz-worthy startup hubs. The city has numerous accelerator and incubator programmes which attract up and coming brands from around Europe.

Creative industries like TV, music, theatre, and art are thriving in Amsterdam. The city is also home to some of the world’s leading advertising companies, including 180, Wieden + Kennedy and 72andSunny as well as key players in the gaming industry EA and Guerrilla.

It is estimated that Dutch creative industries are worth €12.1bn annually. The country also ranks third in the world for creative outputs. The sector is spread around the city. 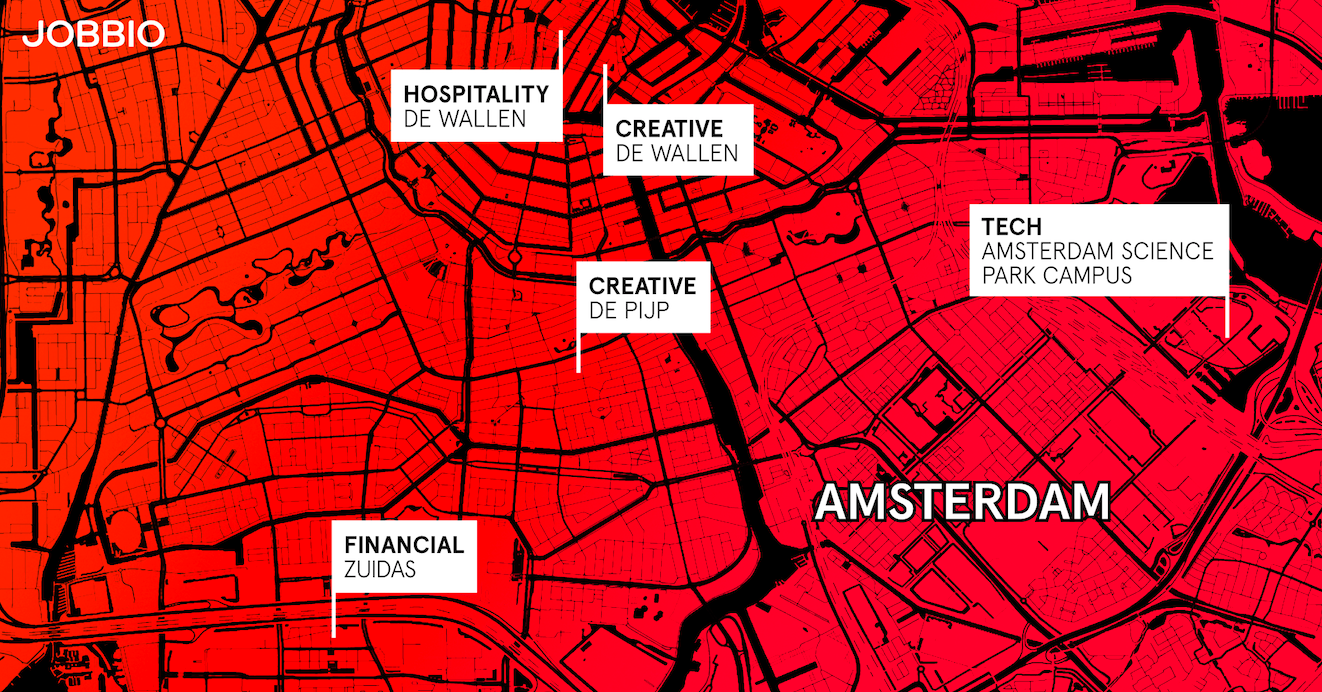 If you’re thinking about making a move to the Netherlands you need to make sure that you are legally allowed to work in the country.

You can find out more information about the different types of visas and who can apply for them on the country’s official website here.

Paying tax in the Netherlands isn’t very straightforward, especially for expats. The country is very socially conscious. As a result, higher earners can expect to pay up to 52% of their salary to the taxman.

However, your personal situation (a non-working partner, for example), type of work, residency status and other assets and earnings (particularly from abroad) will affect your position considerably.

The fiscal year is the same as the calendar year. Residents have to report their income from the previous year before April 1st. The system integrates the income tax with fees paid for the general old age pension system, the pension system for partners of deceased people, and the national system for special medical care.

For expats, particularly in the year of arrival and the year of departure, filing a tax return may result in a substantial rebate. Tax returns can be completed retrospectively for a period of five years. 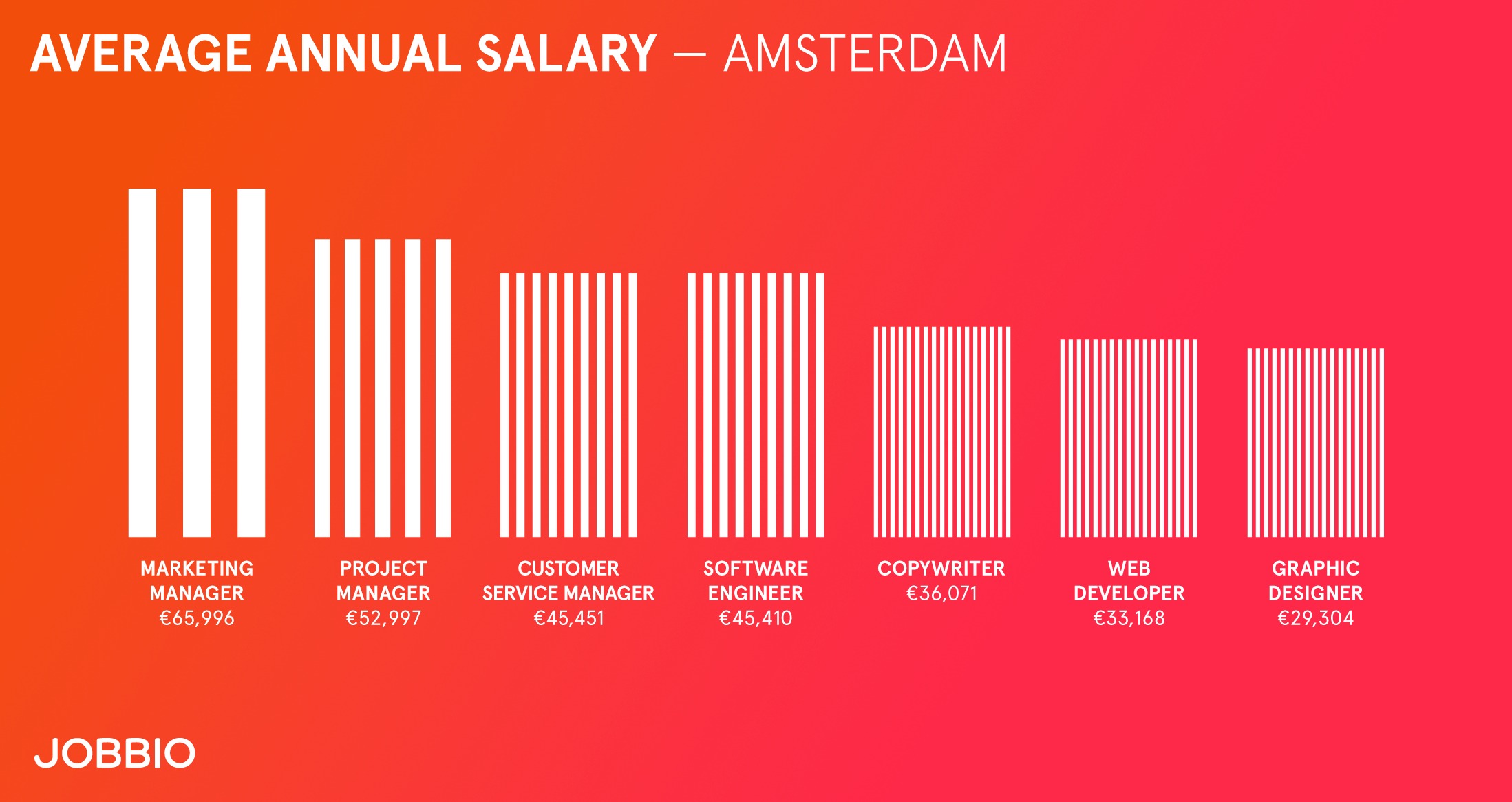 The majority of housing in Amsterdam (and in the Netherlands in general) is made up of social rentals and owner-occupied homes. As a result, many expats have to rent from the smaller private sector which makes up just 5-10% of the market.

Because Amsterdam is such a thriving and popular European hub rent rates have increased significantly over the last number of years. As of 2018, the average private monthly rental price in Amsterdam stands at around €23 per square metre. That’s about €1,800 for a 80m² apartment.

Most expats use Funda a rental property website. Alternatively, you can approach an estate agent. Make sure that your estate agent is registered with the national association Nederlands Vereniging van Makelaars (NVM). You will normally have to pay a commission to the agent if you find a place through them which can be as much as one month’s rent.

You can compare rent prices in Amsterdam with other European cities using the graph below. Figures are courtesy of Statistica. 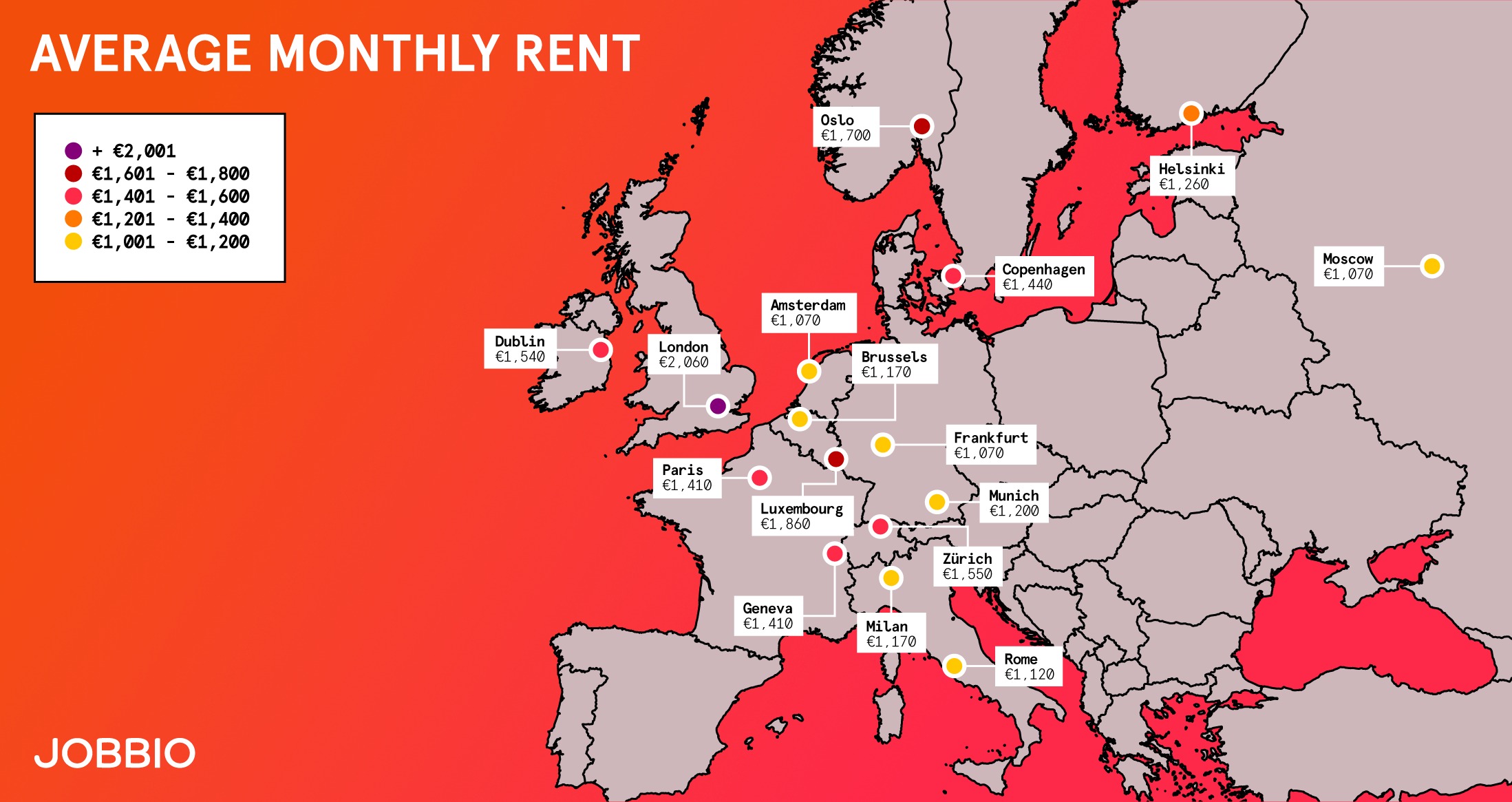 Here is a quick rundown of some of the main areas in Amsterdam.

This is one of the largest districts in Amsterdam. The old area is full of curving small streets and English-style country houses. However, because of its huge land mass, a lot of new housing is popping up in the district.

Centre and the canals

This is the most touristy part of Amsterdam and also the most expensive place to live. Apartments in this region tend to be small with steep steps to reach each floor. While many expats want to live in this area to have a traditional ‘’Dutch experience’’ you can get a lot more for your money elsewhere.

Jordaan has become an increasingly desirable neighbourhood. The area attracts a mixture of young families, professionals and expats. Prices in Jordaan have increased over the last number of years. However, the nearby Westerpark offers much more affordable housing while still being close by.

De Pijp is known as Amsterdam’s Latin Quarter. It’s a quirky neighbourhood bursting with personality and culture. The area has benefited from past government regeneration initiatives and is now a firm favourite amongst college students and creatives alike.

East of De Pijp is Oost. The river, newly-renovated Oosterpark, and the area’s proximity to nature reserves make this zone very appealing to a wide variety of Amsterdam dwellers from young families to retirees.

Oud-West is situated right beside the spacious Vondelpark. It’s an up-and-coming area of the city that is very popular with expats. There is a great mix of different cultures in this neighbourhood from the posh streets near the park to the ethnic grocers on De Clercqstraat and Kinkerstraat.

Unfortunately, expenses don’t stop at rent. According to Expatistan two tickets to the local cinema will set you back €22 while a beer in your local pub will cost you €5.87 (if you’re lucky).

If exercise is your thing then you can expect to shell out €44 for a one-month gym membership. Or if you would rather go to the theatre you will probably spend €90 on two decent tickets.

”Register for a BSN number as soon as you arrive. You need one for pretty much everything in Amsterdam from renting an apartment to paying tax.”

”Don’t forget that not all apartments will let you register. Without it, you can’t open a bank account or get health insurance. It’s a big no-no but lots of expats and students get caught out.”

”When you move to Amsterdam try to avoid the touristy areas. They’re so over-priced. Explore more of the local neighbourhoods instead.” 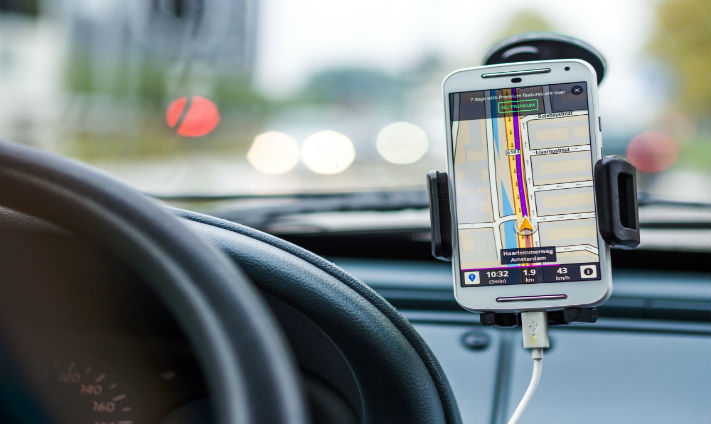 How GPS Changed the World (and Business) Forever

How GPS Changed the World (and Business) Forever