The Ultimate Guide to Living and Working in Singapore

By Alice MurraySeptember 21, 2018For Talent, Other

Singapore is one of the biggest melting pots in Asia. Within a total area of roughly 700 square kilometres, you can find everything from gleaming skyscrapers to ancient Malay mosques and Hindu temples.

Singapore, once swampland, is now a multicultural hub of commerce. The city is often described as a mix of western modernity and eastern culture. This is highlighted by the large expat community that now calls Singapore home.

With low crime rates, excellent public infrastructure and a thriving economy, why wouldn’t you want to call this exciting city home?

Here is everything you need to know before making a move to The Lion City.

According to Moovit Insights, the average amount of time that people spend riding public transport is 84 minutes. This is the same as the average daily commute in London.

Over 85% of commuters spend more than two hours on public transport every day. Despite this fact they are not travelling very far. The average distance that people ride in a single trip is a mere 7.3km. However, 48% of people travel over 12 km in one direction.

The good news? Singapore commuters don’t spend much time waiting on public transport. The average wait time at a stop is a mere 12 minutes. Here are just some of the transport options that are available to residents. 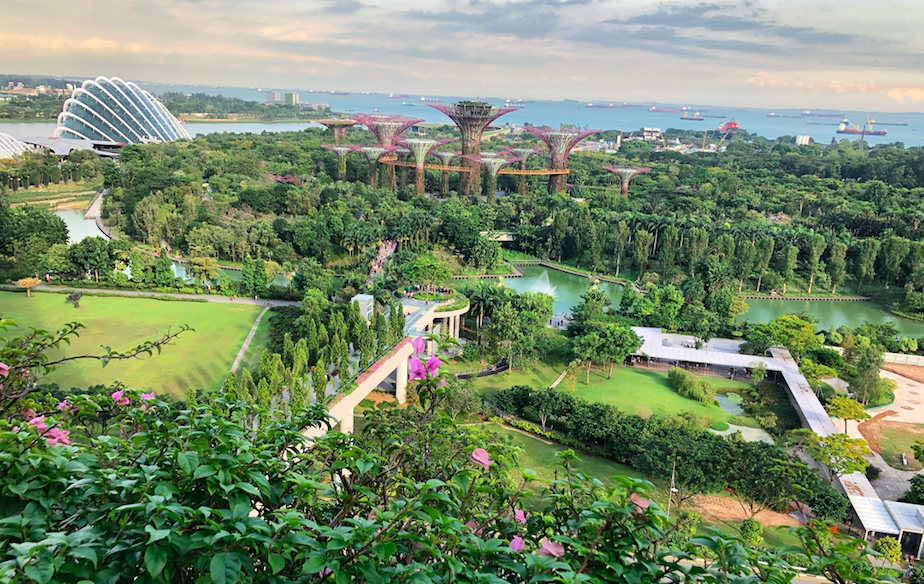 Singapore’s MRT (Mass Rapid Transit) system is probably one of the fastest ways to get around the city. More than 228 km of track span across the island, connecting 157 stations on 5 MRT and 3 LRT lines.

Ticket prices depend on the distance you are travelling and cost between SGD $1.40 and SGD $2.50.

Travellers can also use EZ-Link and Nets FlashPay travel cards or simply use contactless card payments at their stop.

Singapore’s bus system has an extensive network of routes covering most places in the city. It is the most economical way to get around, as well as being very scenic.

You can pay your bus fare using a travel card which you tap on the card reader located next to the driver as you board. Remember to tap your card again, on the reader located at the rear exit, when you alight. You can also pay in cash but you need to have exact change.

Taxis are a comfortable way to travel around Singapore. You can flag down a taxi at any time but in the city centre taxis are technically not allowed to stop anywhere except the dedicated taxi ranks. Cabs are metered but there may be surcharges depending on when, where and which company’s taxi you use. 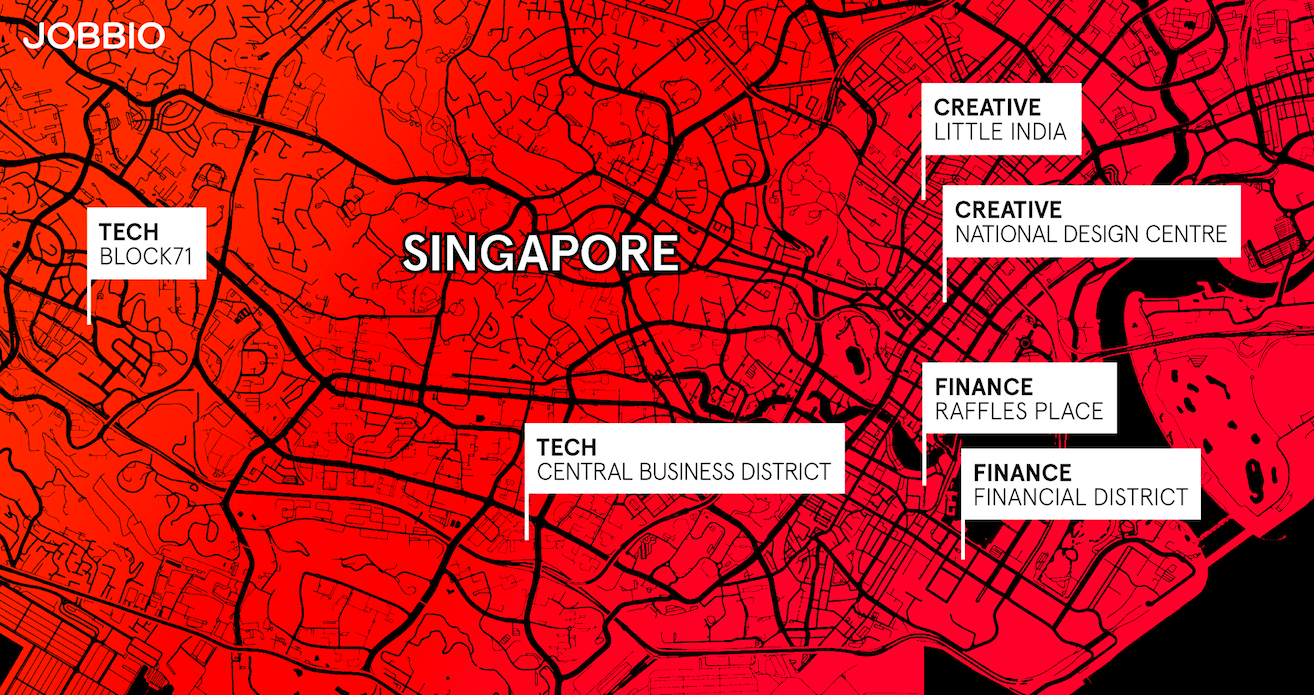 Singapore is often seen as the financial hub of Southeast Asia. The city holds the headquarters of many international banks, wealth management firms and other financial institutions. Singapore also has the fourth largest foreign exchange market in the world after London, New York and Tokyo, and is widely recognised for its strength as a foreign trading hub.

Tourism is a massive business in Singapore thanks to the country’s central location in Southeast Asia. In fact, tourism rose by 3.9% in 2017 to a huge SGD$26.8 billion. As a result, hospitality is a huge source of jobs. The hospitality sector is mostly based in the Central Business District where hundreds of hotels and restaurants cater to the millions of tourists and business people that visit each year.

Singapore has been described as a ‘’miniature Silicon Valley’’. In fact, IT is now ranked as Singapore’s strongest sector. It’s no surprise then that Singapore is host to a multitude of technology and start-up business events including Tech in Asia, innovfest unbound and Echelon Asia Summit.

Recently, the Singapore government has been promoting a shift to a high-tech creative economy in sectors such as lifestyle, animation, game design, creative agencies, industrial design, and sports. The city is putting funding and resources behind their creative sector which will hopefully have a knock-on effect for the future. 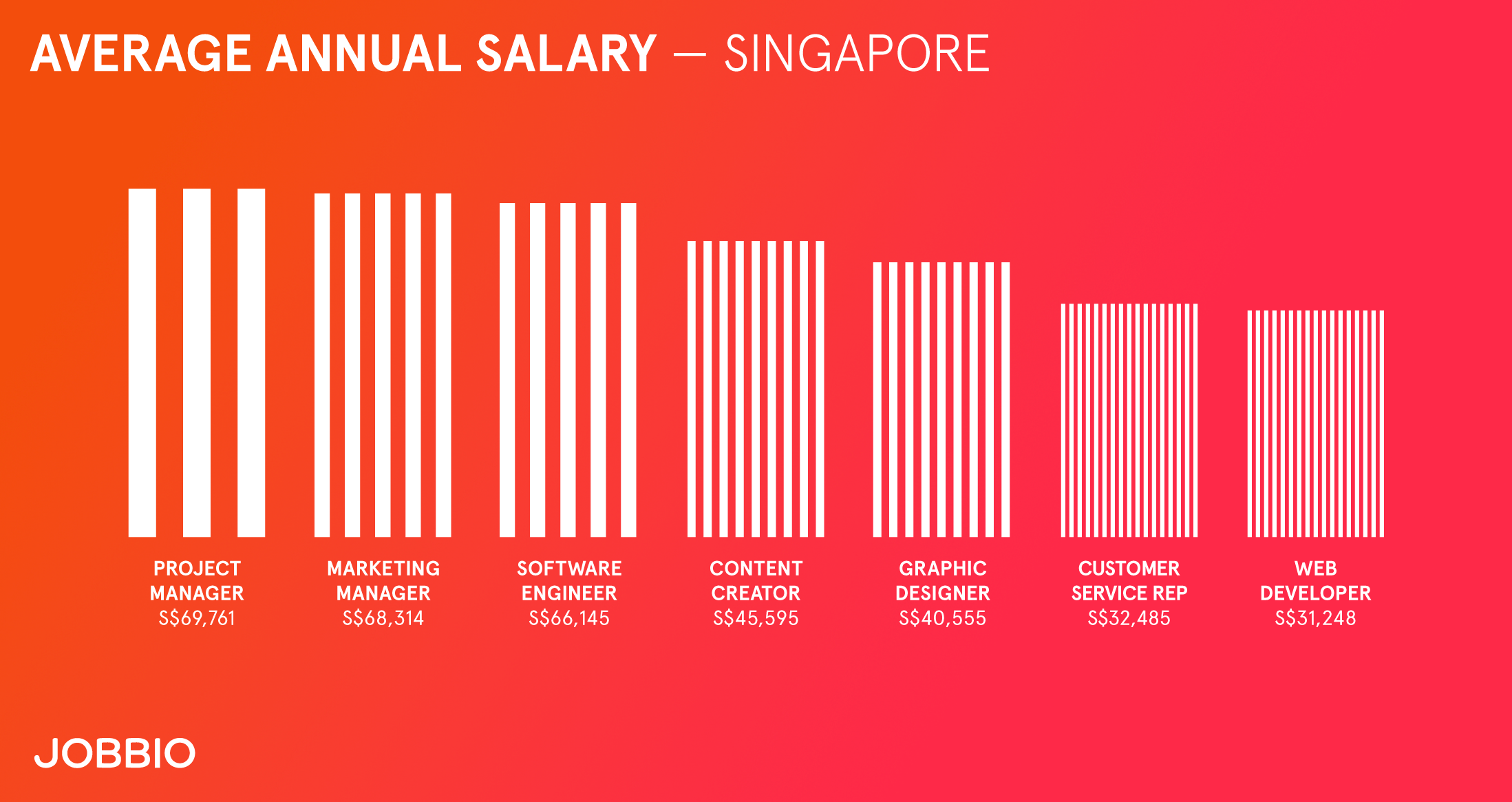 With a workforce that is made up of nearly 40% non-residents, Singapore is tightening their rules and standards for work permits and visas for overseas workers.

In fact, an employer with more than 25 people has to advertise their job position to locals before applying for a foreign visa worker.

If you’re one of the lucky people to be offered a job there are various different visas that you can choose from. You can read a list of them here. However, bear in mind that due to high demand the turnaround time for visas is now longer than it has been previously.

Singapore follows a progressive resident tax rate starting at 0% and ending at 22% above SGD $320,000.

Workers are only taxed on the income that they earn in Singapore. So, if you earn any money working overseas you won’t have to pay any tax on it (apart from a few exceptions).

All Singapore residents need to file a personal tax return if their annual income exceeds SGD $22,000. This tax return must be completed by 15th April each year. 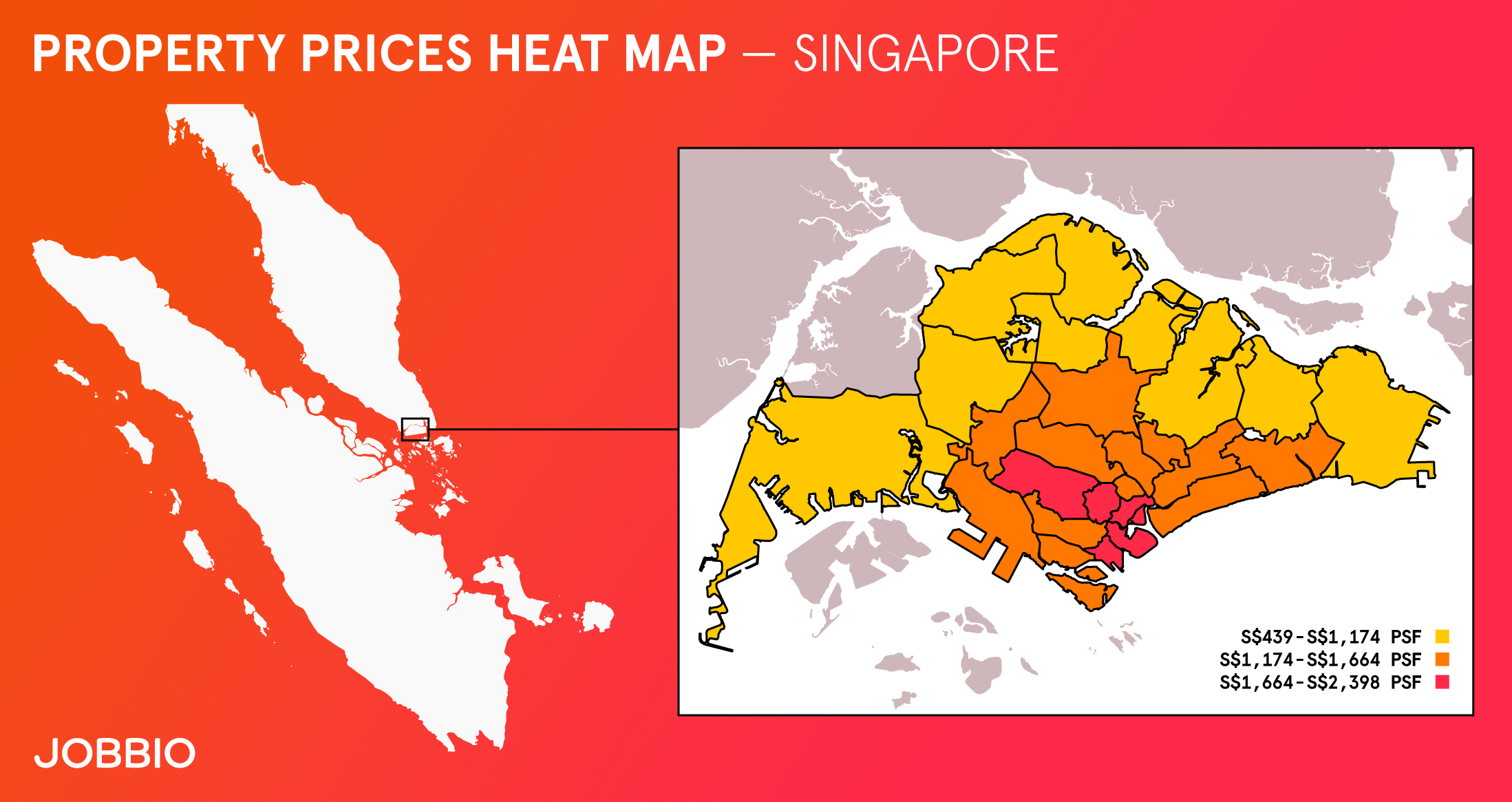 As previously discussed, Singapore is one of the wealthiest countries in the world so you will need to part with your hard earned cash if you want to live somewhere nice. The good news is that Singapore’s rental market has been on a downward slide for the last number of years.

Remember that when you look at rent prices on property websites you are viewing an inflated price. Most landlords in Singapore are open to a bit of healthy bargaining, in fact, they usually expect it.

Rent prices within Singapore can fluctuate quite significantly. This may seem surprising considering the fact that you can drive across the entire island in just under an hour.

Choosing the right location can make all the difference. Despite the government’s best efforts to decentralise the city, the majority of businesses are based at its core. As a result, that’s where rents tend to be highest.

Other factors that can influence rental prices are things like the distance to the nearest MRT station or proximity to even small business or entertainment hubs.

Orchard, Tanglin, Holland Village, Bukit Timah and the East Coast are traditionally very popular areas for expats. In recent years, more people are moving towards Serangoon Gardens, Hougang and Punggol, where there is better value for money.

The average cost of living

The city was named the world’s most expensive city in the world for the last five years running by the Economist Intelligence Unit’s (EIU) Worldwide Cost of Living survey.

If you’re planning on moving to Singapore, you will need to make sure that your income will cover the basic costs.

A pint in your neighbourhood pub will set you back SGD $11. Two tickets to the local cinema are usually around SGD $24 while a lunch in town will probably cost you SGD $12 according to Expatistan.

If exercise is your thing a monthly gym membership is about SGD $151 on average while a three-course meal for two people in a mid-range restaurant is usually SGD $129. 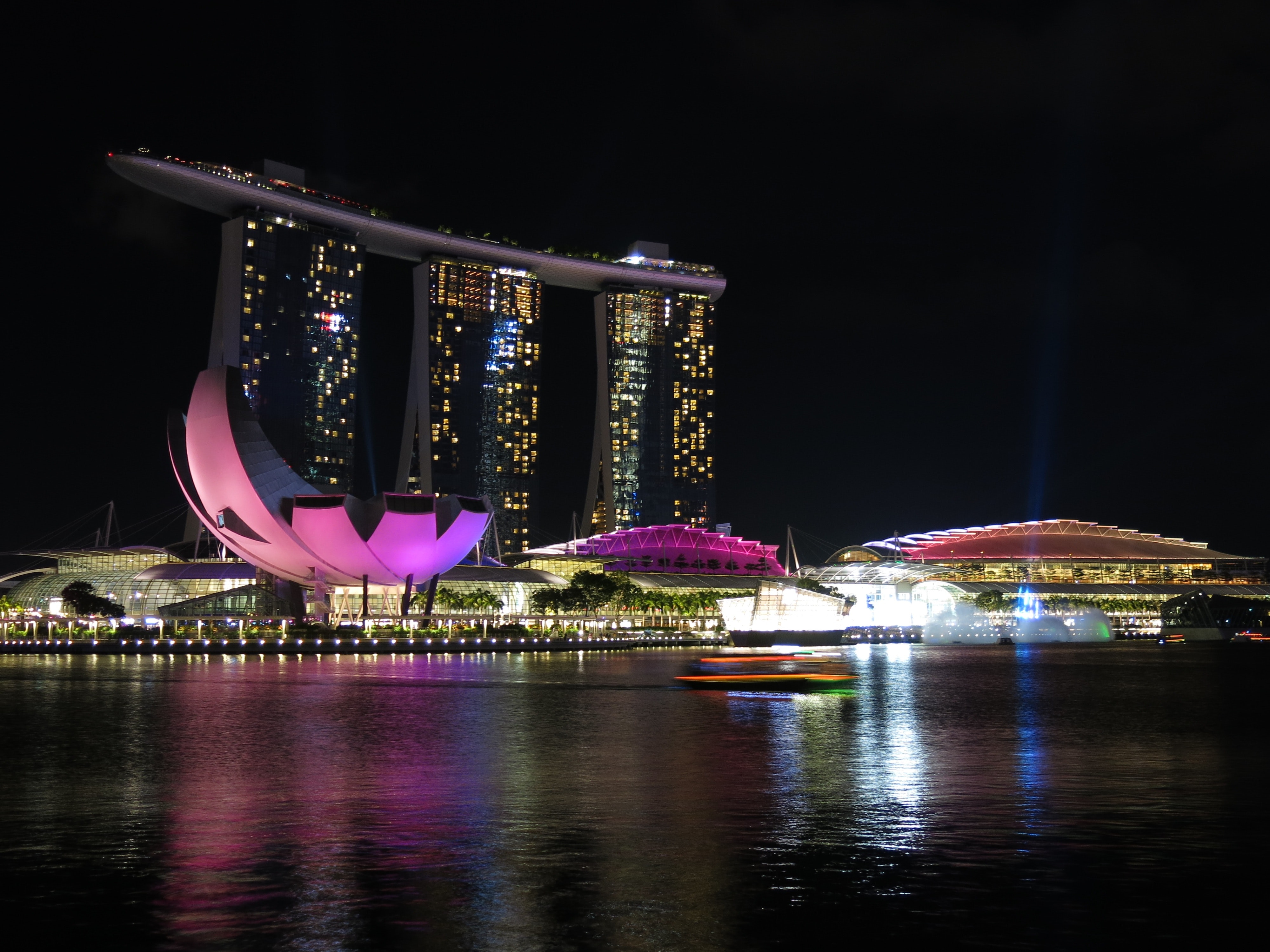 We reached out to three people who have lived and worked in London to find out their advice for newbies. Here’s what they had to say.

”Once you get to Singapore try to join some of the expat Facebook groups. There. There’s a wealth of advice there. I wish I’d known about them when I got here.”

”Get out of the CBD. Singapore has lots of green spaces. Check out the nature reserves and surrounding islands when you need a break from the city.”

”Use Singapore as a base to explore other parts of Southeast Asia. Don’t stay in the one place and book looks of weekend breaks.” 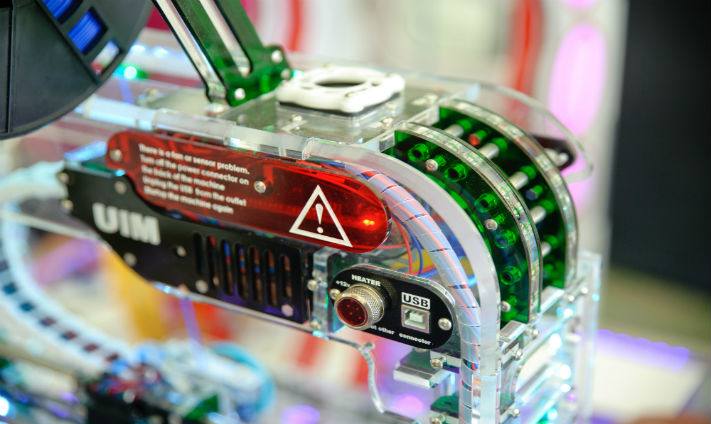 Machines Will Take Over Half of Workplace Tasks by 2025

Machines Will Take Over Half of Workplace Tasks by 2025